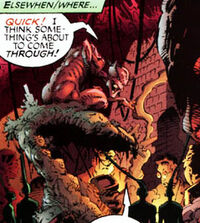 %^9 is one of many inhabits in The Overlap. He became interested in the ways to destroy Hellspawn. Witnessing the Atomic Bomb of 1945, the creatures of The Overlap discovered that atomics created a scenarios which could in theory harm demons and scatter their infernal matter.

In order to test his theory, %^9 took the steps to program a "thought-program” into Yousef Volokhov, a world leader in atomic theory and presenter at an upcoming conference in New York City. The program would prompt him to detonate an Atomic Bomb and as a separate plan he would lure Spawn into its blast radios to test his theory.[1]

However, Harry Houdini interceded and teleported the bomb before detonation to the Overlap, catching %^9 in the explosion. This, ironically, proved his theory that demons could be damaged by nuclear explosions.[2]

Retrieved from "https://imagecomics.fandom.com/wiki/%25%5E9?oldid=30445"
Community content is available under CC-BY-SA unless otherwise noted.