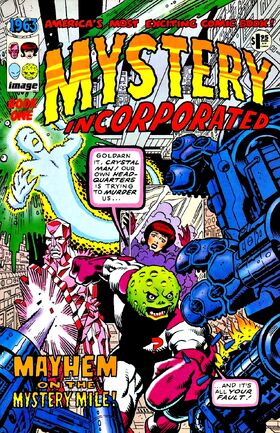 Flame jets?!? What do they expect me to do? Turn back because I forgot the marsh-mallows?!?

The members of Mystery Incorporated are putting their strongest team member the Planet through a training scenario. The Planet must try and run the gauntlet of the Mystery Mile and avoid all of the building’s defense systems. The other team members (Crystal-Man, Neon Queen and Kid Dynamo) all pour on the attack and eventually manage to stop him.

After the exercise, Neon Queen discovers that someone has broken into their headquarters by way of the dimensional window known as the Maybe Machine. Strangely enough however, this mysterious individual is seen walking backwards throughout the complex. He sets off the Mystery Mile’s defense systems and the team has to fight their own headquarters to try and find the Backwards Bandit. Kid Dynamo approaches him and tries to ensnare him in a ring of electricity, but the Backwards Bandit siphons the Kid’s power (as well as the Kid himself) into a small transmitter device and escapes from the headquarters.

Crystal-Man discovers that the Backwards Bandit must have come from a future alternate-reality. By traveling backwards through time through the Maybe Machine, he overshot the waveband mark and that is why he appears to be walking backwards. Mystery Incorporated decides that the only way they are ever going to save Kid Dynamo is by following the Backwards Bandit into the Maybe Machine – something they have never dared try before.


Appearing in "A Pageant of Possibly Pointless Postings from the Parlor of Perfection!"

Plot Synopsis for "A Pageant of Possibly Pointless Postings from the Parlor of Perfection!"

Retrieved from "https://imagecomics.fandom.com/wiki/1963_Vol_1_1?oldid=76371"
Community content is available under CC-BY-SA unless otherwise noted.