"When Wakes the War-Beast" 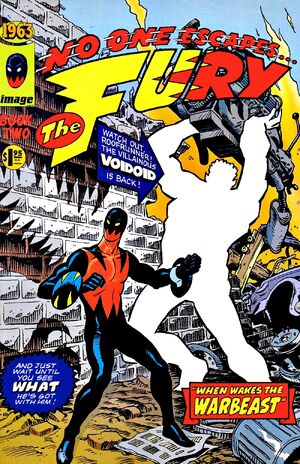 Appearing in "When Wakes the War-Beast"

Plot Synopsis for "When Wakes the War-Beast"

The Fury helps Laser with a frozen Specimen taken from Antarctica. After leaving, he runs in Kraken agents and fights them. After defeating them, he runs into Voidoid who uses new technology to fight against the Fury. While they fight, the specimen awakens and reveals itself tol them to be a T-Rex with psychic abilities. It proceeds to destroy them. After a heated battle, the Fury proceeds to defeat it by having it fall in the ocean. Afterwards he heads home and ponders of how he's lived up to his dad's legacy.

Fury is an homage to Spiderman with some Captain American and Daredevil thrown in. L.A.S.E.R. is an homage to Shield Sky Solo is a female Nick Fury The two villains mentioned by Voidoid, The Dune and Pyroman are likely homages to Sandman and Molten Man Kraken is an homage to Hydra.

Retrieved from "https://imagecomics.fandom.com/wiki/1963_Vol_1_2?oldid=67891"
Community content is available under CC-BY-SA unless otherwise noted.