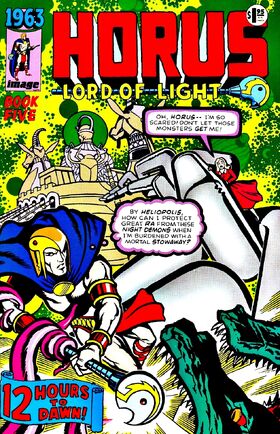 Appearing in "Twelve Hours to Dawn!"

Horus defeated Termagant with his Solar Staff. Afterwards, the police took Termagant's body into their custody to contain him, while Horus flew away. Horus flew to the Midtown campus to transform back into Professor Whittaker Falcon, uttering the Pnakotic Ritual. Suddenly, he was visited by his student Janet Jones, who expressed her enthusiasm for her assignment on Egyptian mythology. They went to his lecture together. Afterwards, Whittaker Falcon went outside and transformed back into Horus. Meanwhile, Janet witnessed Horus enter the Barge of a Million Years and tailed him inside, hiding inside of a sarcophagus. On the barge, he reunited with his Thoth and Ra. Later, they had arrived at Heliopolis and disembarked. When they had disembarked, they had encountered Set, the God of Storm and Tempest, who had killed his father, Osiris. Horus prepared to battle Set, until the former's mother, Isis had appeared.

Thoth went to the library while Horus recalled the time Set had killed Osiris and afterwards, Isis reassembled Osiris and created her son, Horus. Suddenly, Horus had encountered Upuaut, the Opener of the Way, who had told him that Set had given them poisoned wine. The Barge was being launched from Heliopolis, so Horus rushed and boarded the Barge, climbing up the Ankhor Chain. It was night, so Horus saw Ra in his nocturnal form, Auf, the Corpse-God. Suddenly, he had seen Janet Jones, the student of his alter-ego Professor Whittaker Falcon, onboard the Barge. Janet claimed that she boarded the Barge for her assignment. Upon entering Restau, the Underworld, they encountered Seker, the funeral god, and Ptah, the divine artificer. They had passed by the River Carrion until entering the mouth of the god-snake Nehebkau. They had exited through another head and Horus used the Solar Staff to blind Nehebkau and escape.

After the Fourth Hour of the Night had passed, they had encountered Astarte, Queen of Blood, whom Horus had rejected. Astarte sent her necro-nymphs to attack the barge, so Horus ordered Janet to steer, while he defended them. The necro-nymphs attacked the Ankhor, so Horus picked it up and threw it off of the Barge, taking down the necro-nymphs. Then, Horus went to confront Astarte, who told him that Janet had steered the Barge into the Sixth Hour of the Night, into the realm of Anubis. Horus rushed to find that Janet had been captured by Anubis' were-dogs, so he chased them down until he had encountered Anubis himself and punched defeated him, saving Janet. Then, Horus and Janet attempted to flee, but were ambushed by Anubis, who demanded Janet in exchange for Horus leaving in peace. Suddenly, Herakhty, the Elder God had awoken and was angered. Horus attempted to appease Herakhty, while Anubis fled in fear. Herakhty allowed Horus and Janet to leave on the Barge.

Horus and Janet returned to Heliopolis at sunrise. Thoth had met them and informed them that the Ennead had been convened to try Janet for sacrilege by setting foot on the Barge. The Ennead informed Horus that Set had told them of Janet setting foot on the Barge. The Ennead sentenced Janet to be blinded, but Osiris, who had "dwelt in exile far beyond death's further shores" had suddenly appeared and defended her, claiming that she acted bravely and served Ra by taking the helm of the Barge while Horus was occupied and that she deserved thanks rather than punishment. Later, Isis had bade both Horus and Janet farewell as they returned to Midtown College. Janet was asleep and Horus laid her down before he transformed back into Professor Whittaker Falcon.


Appearing in "An Ecstatic Effulgence of Enjoyment and Erudition Effortlessly Erupting From the Epicenter of Egotism!"

Plot Synopsis for "An Ecstatic Effulgence of Enjoyment and Erudition Effortlessly Erupting From the Epicenter of Egotism!"


Appearing in "Hieroglyphics to Horus"

Plot Synopsis for "Hieroglyphics to Horus"

Retrieved from "https://imagecomics.fandom.com/wiki/1963_Vol_1_5?oldid=73284"
Community content is available under CC-BY-SA unless otherwise noted.