"From Here to Alternity!" 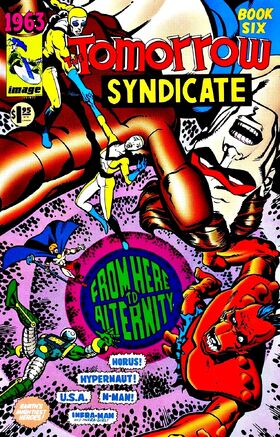 You heard the man! Syndicate Scramble!

Appearing in "From Here to Alternity!"

Plot Synopsis for "From Here to Alternity!"

Horus and U.S.A. had arrived at the Tomorrow Complex in Mount Rushmore after being summoned by Inframan. When they arrived, they saw N-Man arguing with Hypernaut about American and alien technology, until Horus broke up the argument. Then, Inframan briefed the team on several strange-looking weapons, which Hypernaut claimed were similar to weapons on alien worlds. Inframan informed the team that the weapons had been previously used by Voidoid against Fury and that the weapons had traces of radiation and sources of similar radiation had been found in Manhattan. Next, the team got into the Tomorrobile and made way for Lexington Avenue in Manhattan. As they had flew by New York City, Fury had seen them from his window. When they had landed, they alarmed the inhabitants of the city and Hypernaut used his x-ray scan to find an underground technological labyrinth under New York City. Then, Inframan used his size regulator to shrink the Tomorrobile and the team into microscopic size in order to be able to infiltrate the labyrinth underground, which turned out to be the Mystery Mile, the headquarters of Mystery Incorporated. Meanwhile, the Fury also made his way inside. Then, they found a chamber that lead to numerous parallel universes invented by Crystal Man and they decided to use it. They entered the Time-Stream and encountered the Victory Vanguard, including U.S.A.'s past self and the original Hypernaut. The Victory Vanguard followed the Tomorrow Syndicate in their Futurosphere and became acquainted with each other. Then, the two teams pass through the Lobby of Alternity and Parallel Worlds Department before parting ways. The Tomorrow Syndicate attempted to learn about Mystery Incorporated's whereabouts and were directed to Bay Fourteen to learn more. Then, the team left the dpeartment in the Tomorrobile. Eventually, they found themselves in a reality where the heads on Mount Rushmore were "America's greatest villains" consisting of Al Capone, John Wilkes Booth, Benedict Arnold, and Billy the Kid. They decided to land inside and found badges of dead law officers and portraits of Genghis Khan and Adolf Hitler. Then they saw five villains inside of the base known as the Tomorrow Gang. The two teams briefly fought before the heroes decided to leave and search for Mystery Incorporated. Next, the Tomorrow Syndicate encountered a giant villain called the Orbiteer, but was defeated and killed by Horus. Next, the team went into a space warp and ended up in a reality where America was destroyed after the Cuban Missile Crisis. Eventually, they went into a reality where JFK and Jackie Kennedy were sitting in the presidential motorcade with an extraterrestrial entity known as Bimbo and was targeted by the sons of Alec Hidell. They went through the Time-Stream again and ended up in a reality where they believed Mystery Incorporated were. Meanwhile, an individual who was revealed to be Shaft had Kid Dynamo hostage. On various screens, there were images of numerous other Image superheroes.


Appearing in "Send it to Syndicate"

Plot Synopsis for "Send it to Syndicate"