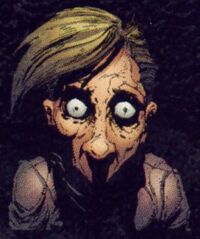 A.J. Ritter is the descendant of Nicholas Noyes. A man who in 1692 had a curse placed on his family that he would choke and die on his own blood for accusin and killing witches.[1]

Learning of his past, A.J. Ritter grew up attempting to learn everything he could about hunting and killing witches. He used the book Maleficent Maleficarum to guide him on his quest to kill as many witches before it was his turn to die.[1]

When he lost his job and his wife left him six weeks prior, he began executing covenants of witches and became known city-wide as the witchkiller. When he was turned in for speaking out violently against witches in online chatrooms, he was captured after a brief pursuit by Sam Burke.[2]

The police initially thought he had snapped and was delusional. When they learned he believed he was cursed by witches and wanted to kill as many as he could before his time came, the prosecutor told them he needed a confession. However, he was soon found dead in his jail cell. He had rigged his body with a salt-capsule that killed himself according to police records.[1]

Retrieved from "https://imagecomics.fandom.com/wiki/A.J._Ritter?oldid=36762"
Community content is available under CC-BY-SA unless otherwise noted.