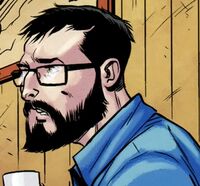 Aaron Weimar is a school teacher at University of Wisconsin. He got too close to his student Em Cypress, and began sleeping with her while still married. Later, Aaron was out to dinner with his wife, Nithiya, when Em spotted them at the bar. Em then proceeded to cause a bar fight to gain his attention.[1]

Later, Aaron approached Em after class. He told her the fight was inappropriate since it was in front of his wife. Em became upset that he was more concerned about his appearance with his wife than her well-being and walked out of class.[2]

Later, Dana Revival became suspicious of Aaron. She was researching who had killed Em and found she had exchanged many text messages and calls with Aaron. She waited for him outside of the University. She approached him about hooking up with her sister but he denied it as he knew she'd never accuse him of something so big without evidence. Dana stormed off upset and no closer to the truth.[3]

Upset with their marriage, Nithiya takes Aaron to group support session at St. Mark's Church. He continues to be distant and runs off to speak with Joe Meyers, a Reviver, at his earliest opportunity.[4]

Aaron began treating Joe Myers in his therapy sessions. Sherry Myers had become concerned about Joe’s attempt to dig a grave with his bare hands and paid Aaron to treat him. Joe told Aaron he had been having strange thoughts since he came back to life. He was constantly obsessed with finding things, such as a gold ring that had gone missing. He told Aaron long before Sherry, he was in love with a farm girl named Mimi. That ring was actually going to be hers. However, she left him for another man and he never saw her again. He never stopped loving her until the day he died. Now he realizes he doesn't really have feelings anymore.[5]

The next day on Valentine's day, Aaron met with Joe again. Joe tells him his old housekeeper had called to return the ring, but forgot where she had put it. When Aaron asked how it made him feel, Joe became upset and told him he couldn’t feel anything as he physically grabbed Aaron's arm to get his attention. When Joe realized he felt something after touching Aaron, he leaped over the desk and kissed him on the lips. Joe acted like he saw a vision of who Aaron really loved after kissing him. He promised him he never would stop loving her and referred to Em's smile as he walked out of the session leaving Aaron confused.[6]

Later, Em headed to Aaron Weimar's house due to the stress of fighting a Creep. She stripped of his clothes and told him she just needed to cuddle with him and they lay on the floor together.[7] Later, Aaron received a call from the dean that his office had been set on fire.[8] He grabbed Nithiya and delivered a paper to her. He tells her to read it, and then burn it as he takes off.[9]

His letter explained he was obsessed with his legacy. When he couldn't pass on an heir because she couldn't produce children, he lost himself in work and in life.[9]

Aaron then drove to the Grist Mill where he waited for the masked man who burned his office. The man asks if he has a son, and Aaron responded that he didn't. The man tells him he wouldn't understand and strangles Aaron.[9]

Retrieved from "https://imagecomics.fandom.com/wiki/Aaron_Weimar_(Revival)?oldid=40723"
Community content is available under CC-BY-SA unless otherwise noted.