Aaron Wilkes (Sons of the Devil) 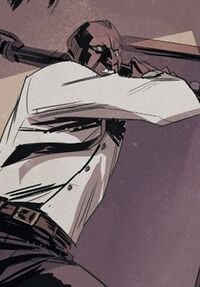 Aaron Wilkes worked for Eric Burton. Under Eric's orders, he got close to Klay and became a secret contact for him. When Travis Crowe and Melissa visited his office, Travis recognized him and chased him down. After a brief scuffle and the police breaking up the fight, Aaron did not press charges by orders of Eric. When he met with Eric to tell him of his actions, Eric shot him in the head and left him dead in the car.[1]