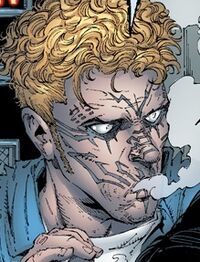 Ab, and his partner Zab, is a freelancer demon who possess the ability to open the gates between realms.

The two were hired by Malebolgia to return Urizen to Earth.[1] When they arrived in Malice, Pennsylvania, they waited at a nearby dinner until 13 patrons were present in the building at one time. They then executed all of them and dragged them to the top of a hill on a full moon.[2] They then lit the bodies on fire which brought Urizen to Earth who then went on a rampage attacking and killing civilians nearby.[3]

The two hightailed it back to New York City to take pleasure in sins before Urizen brought on the end of the world. Angela appeared and tortured them for information.[4] When she discovered they had a silence charm cast on them and couldn't speak, she dragged them with her as she helped Spawn battle Urizen. Spawn used his new Greenworld powers to raise trees around Urizen and eventually pull him underground and trap him once more in the earth below. Ab and Zab were terrified of his new powers and finally admitted that Malebolgia had hired them to release Urizen so that he may attempt to overtake Hell while the Armageddon War was taking place.[5] Thinking they were of no consequence, Spawn let the two leave unharmed as he headed to Hell to battle Malebolgia.[6]

Later, Ab and Zab were found in New York City rooting the return Satan to a crowd of people.[7] They were approached and ordered by Spawn to get to the bottom of what evil was brewing. Spawn informed them he was attacked by Simon Pure and with Twitch Williams's son, Max Williams IV, going missing, he felt there was a connection.[8] The duo found decapitated the head of Wolfram in a dumpster and brought it to Spawn.

Wolfram's head revealed it could still speak. He had been attacked by Simon Pure for being a defector. The Kingdom had plans of destroying the world by erasing all sinners starting with New York City.[9]

Ab and Zab agreed to open doors for Spawn as teleporters but warned him there would be grave consequences.[10] They sneaked into the Citadel of the Kingdom and grabbed Max Williams IV. They brought him into a portal to hell which caused the citadel to implode with heavenly forces of hell opening in its bowels.[11] Ab finished the portal and an explosion consumed all the Kingdom members in a fire. Max was saved by the duo but left in an alternate dimension where he could only speak to his father via dreams.[12]