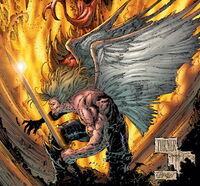 Before he died and became the First Angel, Abdiel was a mortal and a poet in his mortal life. Upon passing to the afterlife and choosing Heaven, he lost his abilities to recall poetry and lived only to serve God.[1]

Abdiel was summoned for a mission to penetrate Malebolgia's inner circle of the Eighth Sphere of Hell. Upon receiving the command, he would terminate him and stop his plan to unleash Albert Simmons as the next Hellspawn. Due to the need to penetrate hell, Abdiel turned in his Angel status and was sent to Hell in hopes of tricking Malebolgia into believing he would be a fallen angel.[2] He first delivered his golden armor to Poacher, a bartender at a popular bar in space, for safe keeping until his return.[1]

Upon arriving in Hell there, Smuggler eagerly volunteered to become Abdiel's guide to lead him to Malebolgia. Along the way they met Lilith The Grand Duchess of The Eighth Sphere of Hell. Abdiel quickly rejected her and his might attracted Malebolgia to appear.[2]

Six months after their meeting Abdiel is still undercover in Hell. Malebolgia has put him in charge of gathering provisions for the welcoming of Al Simmons who was to become the newest Hellspawn. Abdiel was just about to attack Malebolgia when he was summoned back by General Cheriour. Infuriated, he questions God if he was doing His will. God punished Abdiel by casting back to the pits of Hell. Abdiel suddenly realized Malebolgia has planted seeds of doubt in his mind that cause him to loose faith and his status in Heaven.

Over the next years. Abdiel returned to Poacher's bar, who continued to maintained his golden armor.[1]