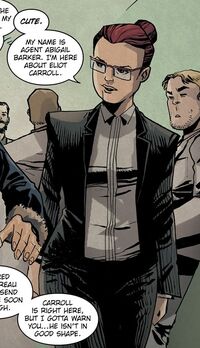 were you getting headaches...?

Abigail Barker works for the Federal Bureau of Investigation. She appeared in Buckaroo after being called in due to agent gone missing.

Upon arriving, Barker informed Sheriff Crane she was taking over the case. She was shocked to learn Finch was involved as he was currently on trial for murder.[1] She soon laced into Finch about being too close and that he needed to back up.[2]

Later, Crane insulted Barker at a shooting range. She called that Barker was hiding somthing.[3]

Later, Barker was called in when Finch was attacked at Beekeeper's house. She arrives with a task force and found nothing. She began to think Finch might be loosing his mind.[4]

Reprogramming in the Caves

Barker was soon abducted by the Minotaur. She watched as Roger the beekeeper was hacked to pieces before her eyes. She was soon dragged to back room and told there were bigger plans for her.[5]

Abigain was mysteriously released. She began to crack down on Finch and ordered he be turned in for insubordination and return to trial. When they prepared to take him, Finch learned that Eliot Carroll had awoken. While he was frantic and worried about his friend and the secret of Buckaroo, Abigail remained stern and convinced Finch to let himself be cuffed and turned in.[6]

Later at Federal Bureau of Investigation Headquarters, Barker learned that she was pulled from the Eliot case. She was soon sent to Atlanta where seven bodies had turned up due to a new Devil Killer. The police soon arrested Daniel as the lead suspect for the murders. When Barker learned that Daniel was from Buckaroo, she went to San Antonio to find Nicholas Finch who had been relieved of duty. She asked him for help in investigating the case.[7] All the while, Barker would have violent visions of murdering people and receive a splitting headache. Finch soon arrived and interrogated Daniel. He very quickly believed he wasn't the Devil Killer and ordered him to be released. Barker was shocked but Finch revealed his plans to tail Daniel. Together, Barker and Finch witnessed Daniel get dumped for lying and fired for the publicity of the Devil Killer case. They saw him duck into a building where they attempted to follow but instead found Warren standing over a murdered person dressed as a Devil.[8]

Daniel and Warren quickly explained they weren't responsible for the woman's death. They were attempting to flee Buckaroo and Warren was helping them get setup with jobs and a new identity. Finch and Barker were slow to accept their story. They asked if there were others from Buckaroo in Atlanta. Daniel told them there was only Frank and he didn't show up to meet with him as he had planned. They decide to head to a secret meeting spot where they would meet occasionally. However, upon arriving, they found Frank was tied up in a strange structure. When Daniel moved to help him, Frank blamed him for being in the trap and then was lit on fire when Daniel tripped a wire and lit the structure. Barker and Finch became even more suspicous and Daniel took off in an attempt to escape while claiming innosense. However, he was shot in the head by Officer Vaughan. The crew was at a loss as to whether they should believe Daniel was truly guilty or not.[9]

Later, Vaughan received awards from the city for taking out the Devil Killer. However, Barker and Finch didn't believe the story and instead took the time to break into Vaughan's house and search for dirt. They found a knife that implicated Vaughan to be the Devil Killer. Suddenly, Vaughan returned home and attacked Finch and Barker for discovering his secret. Vaughan revealed he had been re-programmed by The Master and was killing the vagabonds escaping from Buckaroo. Barker revealed the building was surrounded by the police and it was over for Vaughan. Instead of being taking alive, Vaughan threw himself out the window and killed himself.[10]

Later, Barker and Finch went to the hospital. Finch demanded to see Carroll as he had helped her take down the Devil Killer per their agreement. Barker first entered Carroll's room alone. She asked what he had discovered. She was growing concerned with the violent visions she had. When he refused to tell, she had a vision of stabbing him with surgical weapons from the hospital. However, she suddenly realized it wasn't a vision and she actually had murdered Carroll. Finch and the FBI ran into the room after hearing the struggle and discovered Barker standing over Carroll's bloody body.[10]

Retrieved from "https://imagecomics.fandom.com/wiki/Abigail_Barker_(Nailbiter)?oldid=55244"
Community content is available under CC-BY-SA unless otherwise noted.