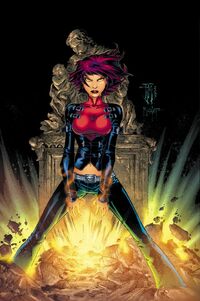 Abigail was the only daughter of a small town pastor and his supportive wife. Life as a pastor's child was not easy for Abby but she managed to do well in school and was a cheerleader for her high school. Her father did not particularly care for the image that his daughter portrayed despite her not doing anything overly wrong. He was very critical when she came home "late" one night after a victory game. Worried that the neighbors would think ill of him, he scolded Abby and when she "defied" him he slapped her across the face.

Abby decided to rebel and after finding a book of magic in a store she got a group of friends together for "Bible Study". Upon reading the book Abby's natural affinity for magic manifested and she inadvertently summoned a demon that proceeded to kill her friends and parents. Abbey escaped the inferno that was once her home and was questioned by the police. She inadvertently killed two officers before losing consciousness. She awoke in a holding cell and was to be inducted into a cult that sought to user her powers to re-release the demon she had released but Abby was saved by Locke, an ancient sorcerer.

Escaping from the cult, Locke brought Abby to Los Angles, CA and began teaching her magic before enrolling her in the local high school. Abby, whose hair was dyed blonde 'till this point, dyed her hair red with highlights and created a new look for herself (stating that Cheerleader Abigail died in the fire). Abby meets Curtis & Janice and the trio begin a friendship but Curtis shortly after is convinced by the demon of teen suicide to kill himself (via hanging).

Abigail and Janice plan a sleep over to help comfort one another so that neither is alone during their grieving period (as Janice's family is out of town and won't be back till the following day). When Abigail arrives at Janice's house the door is open and she hears a muffled cry. The demon has come for Abigail and Janice and tricks Abigail into its dimension. Abigail managed to fight off the demon's influence and with the help of two other friends (Gabriel & Ana), Abigail vanquishes the demon (for a while at least she is told) and the quartet exit the demon's dimension.

The story ends with Abigail being appointed Locke's apprentice (much to the Hierarchy's displeasure) and she checks on Janice who is doing much better since Curtis' funeral (finding peace with Abby's help too).

Necromancer was originally announced back in 2001 with Top Cow president Matt Hawkins as the writer and Brian Ching on art chores. The series would not manifest till 4 years later with a new creative team and premise.

Retrieved from "https://imagecomics.fandom.com/wiki/Abigail_van_Alstine_(Top_Cow)?oldid=46423"
Community content is available under CC-BY-SA unless otherwise noted.