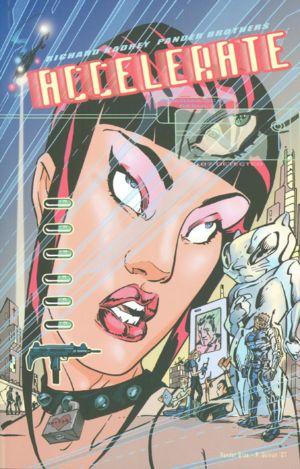 Collects Accelerate (2000) #1-4. In futuristic L.A. where neo-tribes inhabit the urban sprawl, a reluctant leader named Marne is warned that a 'Black Network' inside the LAPD is hunting down tribal leaders - and she's next on the list! When Marne discovers a secret dimension that can be accessed by a drug called Accelerate, she decides take on her enemies to save her tribe. Accelerate is 'Matrix' meets 'Run Lola Run' in a fast Sci-Fi Action drama.

Retrieved from "https://imagecomics.fandom.com/wiki/Accelerate_Vol_1_1?oldid=15178"
Community content is available under CC-BY-SA unless otherwise noted.