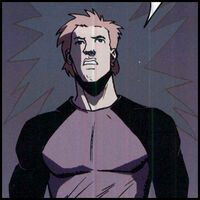 As a young child, Adam Rygert was consumed with unending crippling fear. His father Harold was embarrassed by his son's inability to perform like he thought his son should and the more verbally abusive he became the more afraid Adam became.

Adam Rygert seems to be a combination of Bruce Wayne and Tony Stark.

Retrieved from "https://imagecomics.fandom.com/wiki/Adam_Rygert_(Fearless)?oldid=59163"
Community content is available under CC-BY-SA unless otherwise noted.