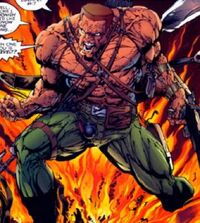 The Admonisher is a human mercenary. He has an insatiable blood-lust and gift for tracking and killing people.

Tony Twist hired the Admonisher to hunt down the Violator. He was sick of the Violator killing his men[1] and was frustrated with OvertKill's failure.[2] The Admonisher accepted the job even though he was warned that he would be hunting a Hellspawn.[3]

The Admonisher tracked the Violator down to a mall. However, all five Phlebiac Brothers appeared and protected the Violator. They didn't want their name sullied by having a demon defeated by a mere human.[3]

The Admonisher believed that they were trying to help Violator. He was swallowed by one and broke out by blowing a hole out of the demon with his guns. He eventually fought the four Phlebiac Brothers by himself and filled them with bullets to send them screaming back to hell in retreat.[4]

Creatures from hell still echo his name and discussed the Admonisher escaping hell and returning to earth.[5]