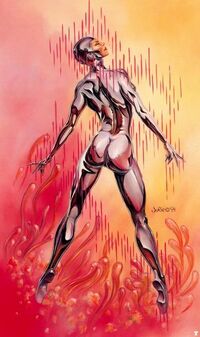 Void was the evolution of a woman named Adrianna who was born in Arkhangelsk, Russian Soviet Federative Socialist Republic, Soviet Union. She was raised with her sister Svetlana by their father after the death of their mother. Her father encouraged Adrianna's ambition to become a cosmonaut and told her that the Archangel, after whom their home city was named was a creature made of silver who would take the chosen ones to the stars.