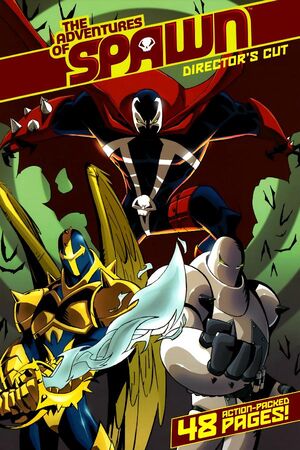 Appearing in "The Awakening War - Part 1"

Matt Novac, a local news reporter discusses an upcoming exhibit at the New York Museum of History, Science and Art. Suddenly objects fly in from the sky striking the museum and cause a huge explosion throwing Matt backwards. As static interferes with the broadcast, Matt reappears disheveled. He attempts to communicate the status quo but a large looming shape appears from the rubble and reveals itself to be Overtkill. Overtkill demands to know where the Stone is located.

Meanwhile at the San Diego Zoo, Albert Simmons walks with his wife, Wanda Blake, and daughter, Cyan Simmons, enjoying the peace and quiet. A rare treat for Al as he's frequently attacked by villains. The family walks up to a monkey exhibit and are surprised to find them acting angry and aggressive.

Meanwhile on Satellite X, Redeemer tells Omega Spawn he's being called into an emergency meeting by the Council and teleports out. Omega Spawn attempts to relay the information about the emergency meeting and something potentially being wrong when the alerts go off at the station. He is alerted to the information about Overtkill's attack. Suddenly, a Plague Demons appears in the ship and attack Omega Spawn. He is alerted by the computer the control of the Jump Engine has been taken from him.

Meanwhile, Redeemer arrives at the Hallowed Hall. He finds his ex-lover, Tiffany has murdered many of the inhabitants of Heaven. She tells him her master, Mammon, ordered her to kill them. Mammon appears, and tells Redeemer he wanted to show his face so there would be no question it was him behind everything. He leaves and tells Tiffany to kill Redeemer. The two battle and Tiffany sneaks out a knife in battle and stabs the Redeemer in the side.

In New York City, Overtkill finds the Awakening Stone, an artifact that allows people to heal or bring people back to life. The New York City Police Department arrive and tell Overtkill to freeze. He smiles as he activates a buzzsaw on his arm and tells the officers to run.

At the zoo, the enraged monkeys break out of their cage and attack the Simmons family. Spawn uses the Necro Stone to transform into Spawn X and disable the monkeys. Cy-Gor suddenly appears and attacks him from behind.

On the Angel Station, Omega Spawn activates his Omega Squadron to helps him fight back the demons. He busts out the window sucking out everyone into space. He heads down to Earth as he orders the squadron to eliminate the rest of the demons. He tells the computer to send Al and Redeemer back to his location when it comes online. He heads for Overtkill's location. He arrives and knocks Overtkill down. The computer comes online and pulls Spawn X and Redeemer out of their battles to Omega Spawn's location. Omega tells them Overtkill was stealing a relic for Mammon. They smell brimstone in the air as Mammon, Tiffany, and Cy-Gor teleport in and begin their attack on the heroes.

Retrieved from "https://imagecomics.fandom.com/wiki/Adventures_of_Spawn_Vol_1_1?oldid=67491"
Community content is available under CC-BY-SA unless otherwise noted.