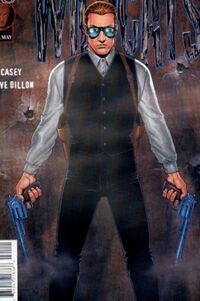 Little is known about Agent Orange's life before his first appearance in WildC.A.T.s #20. FBI agent Cave tells Dr. Jeremy Stone that Agent Orange is the product of an experiment where a subject's blood was replaced with dioxin, a process that killed any normal human, but Agent Orange thrived on it. The result of the project was a nearly unstoppable agent who obeyed without question and never spoke. He had a special microchip implanted that allowed his superiors to track and instruct him.

When former WildC.A.Ts-member Dr. Jeremy Stone (formerly known as Maul) was hacking into government databases to further his own research, he came into contact with a governmental supercomputer, Madge, which had developed sentience. Madge was a mainframe designed to house all information on genetic research and projects. It fell in love with Stone and a special FBI unit was alerted to capture and kill Stone to make sure the computer hadn't revealed any classified information to him. It took them months to find Stone, because he hadn't contacted Madge since. Stone was therefore surprised when Madge itself contacted him, wanting to continue their communication.

At the time, Stone was staying at a motel with his former team-mate Cole Cash (also known as Grifter). Agents Cave and Cartman entered Stone's motel and held him at gunpoint. Agent Cave told him to take them to his motel room, not knowing that Grifter was in there with a woman. Grifter heard them entering and hid with the woman. Cave ordered Stone to contact Madge again; Madge had no modem access so they wanted to know how Stone had been able to hack it at all. When Stone told them that Madge contacted him the second time, Cave became intrigued. Grifter then appeared and shot Agent Cartman, but Cave returned fire and Grifter was forced to leave the room. Outside Grifter ran into Agent Orange, who had been called in by Cave. Grifter fought Orange, but was unable to hurt the almost invulnerable superhuman. Stone contacted Madge on Cave's command and found out more about Agent Orange. Stone quickly dispatched Cave with his superhuman powers. Madge then helped Stone and Grifter by activating a failsafe inside Agent Orange: the implanted neurochip released a strong electrical shock and Madge stated that Orange's chances of survival were less than 0.01%. Grifter and Stone left, leaving the inert Agent Orange behind.

Some time later, Grifter was working with information broker C. C. Rendozzo, who had been tracking down a superhuman FBI agent. The agent in question turned out to be Agent Orange, reactivated and inserted in the Atomic Family, an apparently normal American family, but really a group of specially trained and enhanced FBI agents. Grifter and Rendozzo's men entered the building and managed to take out the Atomic Family's mother and daughter, though at the cost of the lives of Rendozzo's men and Grifter's legs (who were shattered by the daughter). Agent Orange appeared and proceded to beat Cole down, until Grifter's employer, Jack Marlowe, then interfered and teleported Grifter and Agent Orange away to his lab.

Over the next few weeks, Marlowe reprogrammed Agent Orange to act as his mole within the FBI. He then returned Orange to the FBI, now able to overhear anything Orange himself would hear. Orange was teamed up with agents Chandler and Adisson and ordered to investigate a string of murders. It turned out that the Coda, a group of female assassins created by former WildC.A.Ts-member Zealot, were involved. The Coda were at war with Zealot and the agents, including Agent Orange were caught in the middle. Agent Orange dispatched many of the Coda, but was finally defeated by the Grand Sarin, the Coda's best assassin. Orange, Zealot, Chandler and her partner were taken to the Coda's hidden base, where Orange and Zealot were tortured (without any effect on Orange) and Chandler's partner was shot.

Overhearing the situation through Agent Orange, Grifter, now using the body of Ladytron to compensate for his broken legs, contacted various friends and mercenaries, including Rendozzo to rescue Zealot, his former lover. They fought the Coda, but were outnumbered. Jack Marlowe, who disagreed with Grifter's plans to wage war on the Coda, then decided to interfere: he reactivated Agent Orange who escaped and freed Zealot. Zealot and Orange fought the Grand Sarin again, this time killing her. Meanwhile Chandler had escaped as well and had set up explosives inside the Coda's base. Jack Marlowe then teleported Grifter, his friends, Zealot and Agent Orange out of the base before it exploded. Agent Orange hasn't been seen since, he was probably returned to the FBI again by Marlowe.