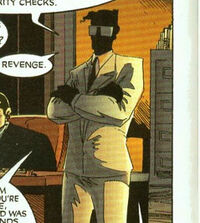 Agent Roenick is one of Jason Wynn's lackeys. He was ordered to follow Terry Fitzgerald when Wynn became suspicious of insider activity with his weapons cache being stolen.[1]

However, he was unable to pin any evidence on Terry. He later paid a visit to Terry and threatened him in order to encourage him to slip up.[2]