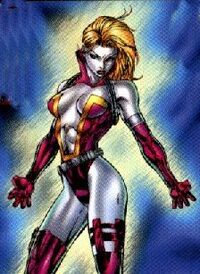 Alessandra Fermi (aka Diva) is a character appearing in the comic books published by Wildstorm. She is a member of StormWatch.

Daughter of a famous Italian opera singer, Alessandra was gifted with the same talent as her mother. When she passed her first audition with a great opera tenor, the stress made her power manifest and she broke all the glass in the room, sending window debris at the face of the musician making him blind.

She joined StormWatch as a member of StormWatch One under the field command of Battalion. During her tour of duty, she showed the most dedication to follow UN's directives and procedures. That granted her the position of field commander afterBattalion's apparent death (to the displeasure of Cannon). And though her and Cannon were involved in a relationship, he turned his back on her out of jealousy and left the team.

She did her leader's job by the book, but was obviously lacking Battalion's charisma and authority.

She was the first fatality of the Despot crisis following the liberation of the WarGuard after the "WildStorm Rising" episode. However, in the wake of the "Worldstorm" event and continuity changes, she was seen alive as a member of Stormwatch Prime in Stormwatch: Post Human Division #1. Worldstorm #2, however, has revealed that the current Diva is in fact the sister of the original.

Retrieved from "https://imagecomics.fandom.com/wiki/Alessandra_Fermi?oldid=63554"
Community content is available under CC-BY-SA unless otherwise noted.