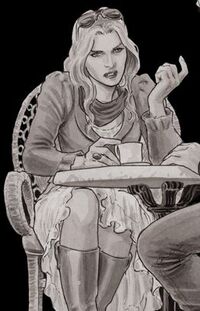 Later, Alex met with Rowan and learned that the call was a man who attempted to kill Rowan. He knew her real name and was under a spell. They talked about a lighter having a hammer signal and realized that 'they' hadn't used spells in a long time.[2] Rowan stole the lighter out of the police evidence bin. She gave it to Alex to use a locator spell to find out who was behind the attack. However, when she started the spell late at night, she was attacked by another witch.[3]

Retrieved from "https://imagecomics.fandom.com/wiki/Alex_Grey_(Black_Magick)?oldid=55059"
Community content is available under CC-BY-SA unless otherwise noted.