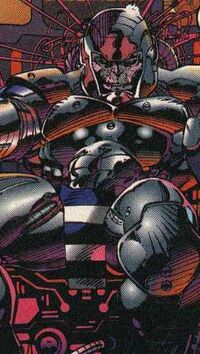 Gnome is an information broker, whose info can be paid in favors.

Gnome first appeared during a meeting with Emp, telling him where the last crossbreed is, in exchange for a future favor. [1] He was later seen gloating that while the WildC.A.T.s, Youngblood and the Cabal fight among themselves, he would take the orb for himself and have supreme power. [2] Gnome finally took the Orb with the help of the Troika, and used its power to shoot Helspont. When Gnome tried to kill Void, he prevented Emp from interfering by reclaiming the favor Emp owed him and reminding him that heroes are bound by their word. Emp claimed he was no hero and shot Gnome's arm off. Gnome fell after his arm that was still grasping the Orb. [3]

Gnome was called by a Daemonite who needed a suitable host, and later dealt with the former Coda Destine to help the Daemonite get the host, with his price being the mere fact that the WildC.A.T.s will interfere, and he wants them to die after their last encounter. [4]