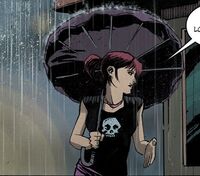 Alice is an adventurous teenage girl who has become obsessed with learning the secret of the Buckaroo Butchers.

Sharon Crane and future serial killer, Edward Warren, became high school sweethearts. Weeks before prom, Crane realized she had become pregnant with Alice. Warren became obsessed with learning the secret of the Buckaroo Butchers and grew distant from Crane. He left her without knowing he had a daughter on the way.[1]

When Alice was born, Crane could not take care of her and drove her to Portland to be adopted. However, since her birth certificate said Buckaroo, no one wanted to adopt her for fear of her turning into a serial killer.[2]

Crane later researched what had happened to Alice and learned she had been transferred to a Buckaroo foster home. She kept watch over her daughter but never approached her.[2]

One day on the street, Alice was sexually approached by Robby and Hank. She was saved by Finch when he arrived in town.[3]

She took an interest in Finch's professional activities and had a map in her basement with the Buckaroo Butchers' murder locations. Despite being normal and coherent, she writes "am I crazy" over and over in her journal as she became scarred that she would become the next Buckaroo Butcher. She began researching the butchers to discover the secret and see if she could keep herself from becoming one.[4]

Soon Alice had mapped out much of the caves beneath Buckaroo. When Finch, Crane, and Warren also discovered the caves, Alice approached them to help them. However, she was suddenly stabbed in the back by the Butcher of Buckaroo. He looked at the rest of the group and told them to run.[5] Sharon, Warren, and Finch attempted to flee with Alice from the butcher. After hiding under some dead bodies, they were informed by Warren that this Butcher has been around for a while. He informed them that they need to look into Doctor Glory's past, particularly his grandfather. Warren stayed behind to slow down the butcher while the rest of the group escaped and and called an ambulance to save the wounded Alice.[6]

Days later, Alice woke up in a hospital in Buckaroo with Sharon Crane watching over her. She asked to talk to her parents and Barker told her they'd need to talk first.[7]

Retrieved from "https://imagecomics.fandom.com/wiki/Alice_(Nailbiter)?oldid=55242"
Community content is available under CC-BY-SA unless otherwise noted.