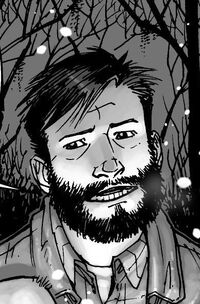 Allen was a shoe salesman, owner of a store in a mall in Gainesville. He was married to Donna, whit whom he had two twins, Ben & Billy.[1]

Just like the majority of people, Allen's family went to Atlanta looking for refuge, but they arrived late: the city was already overrun, and they joined up with Dale, Andrea, Amy, and Glenn to form the original band of survivors, living in a makeshift camp on the outskirts of Atlanta. Their car broke down on the trip from Gainesville, GA, and they made the remainder of the trip on foot. Allen always struggled to find his place in the group, never having enjoyed a well defined role, and was often relegated to watching over his twin boys Billy and Ben.

When the group lifted camp and moved to a more secure place to stay, they found the promising close neighborhood of Wiltshire Estates.[2] However, this place was also overrun with zombies lurking in the abandoned houses, and Allen's wife fell victim to one of them. Donna's death left Allen broken with almost no will to live. He insisted the group to leave him there to die, but he ultimately escaped with them.[3]

Allen kept mourning for weeks, struggling even more as an aggrieved single father, shutting himself off from everything around him and leaving his kids to Andrea's care. When she tried to speak to him to come out of it and pay attention to his sons again, he lashed out, creating a rift between them.[4]

Upon the group settled in an abandoned prison, Allen sought to assert himself and volunteered to help Rick and Tyreese clean out Cell Block A of any possible lurking zombies. As the group toured the darkened halls, Allen fell behind and was bitten on the ankle by a lurker. Though Rick crudely, amputated his damaged leg, and Hershel tried to properly dress the wound, Allen succumbed to his injuries, leaving his sons in the care of Andrea and Dale.