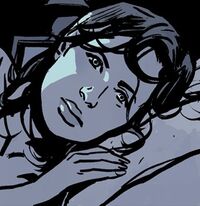 Allison Barnes is the ex-wife of Kyle Barnes. She has a controversial past with having changed and been possessed by a demon. Kyle struggled to exorcise her and she received several wounds in the process. Many people began blaming Kyle as a wife-beater as a result.[1]

Later, Allison met with Megan Holt. She tells her she still thinks about Kyle even with the restraining order. She says as long as their daughter is safe, that's all that matters.[2]

When Kyle stopped by Charleston to find a possessed woman, he made a detour to stop by Allison's house and potentially see his daughter. When Allison spotted Kyle, she went outside to talk with him and ushered her daughter in the house away from him. She admits they had a wonderful relationship, it was just plagued by those 10 minutes where he had beaten her and strangled their girl inexplicably. They kiss for a moment but she pushes them away realizing the mistake she was making and asked him to leave.[3]

After her daughter went out to speak with Kyle, Allison stormed out and told Amber to go back to bed. Kyle asked for one more minute with Amber but Allison refused. Allison and Kyle tugged for Amber before Megan pulled her from harms way. Allison asked why Kyle really came by to stop and hit Kyle a few times before Amber begged her mother to stop.[4]

After learning Mark Holt was hospitalized, Allison went to the hospital to pay her respects. She overheard Kyle telling Megan it was her who beat up Amber. Allison then argued with Kyle. Kyle eventually told her he lied because no one would believe him and that their daughter is possessed.[5]

Retrieved from "https://imagecomics.fandom.com/wiki/Allison_Barnes_(Outcast)?oldid=55009"
Community content is available under CC-BY-SA unless otherwise noted.