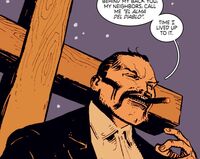 El Alma del Diablo is a Mexican druglord in Mexico.

When a local family stole from him, he killed the entire family except for the daughter, Maria, who was sparred by el Diablo's son, Chico. El Diablo then raised the daughter and the two eventually fell in love and began dating.[1]

Upon finding out his son has disappeared, el Diablo appeared in San Francisco and tracked down F-face's hideout at the Tenderloin.[2] After initially capturing Maria, he and his men were caught off guard by an assault on their vehicle by Maria's smoke pellet. She soon murdered El Alma's men, and then tracked El Alma down to a boxing facility where she killed him as well.[3]

Retrieved from "https://imagecomics.fandom.com/wiki/Alma_del_Diablo_(Deadly_Class)?oldid=32653"
Community content is available under CC-BY-SA unless otherwise noted.