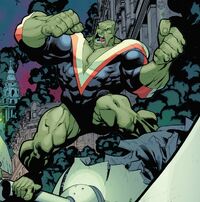 Amanda had enrolled into a school for academically honored students and was able to afford being a school that was mostly for richer children. She took a class trip to Europe and graduated from school two years earlier than regular students. She fell in love with a boy whose grandmother didn't approve of their relationship. She slept with that boy and his grandmother witnessed it. Since the boy's grandmother was a practitioner of magic, she cursed a strand of her hair. On the plane ride back from the trip she cried after seeing her monster form. She did not initially know how to control her monster form, but eventually with practice would be able to transform at will. However, the effects of her transformation would cause her to age in reverse, resulting in becoming younger with each transformation. She used her transformation to fight crime under the alias Monster Girl and continued to fight crime despite the adverse effects of her transformation.[1]