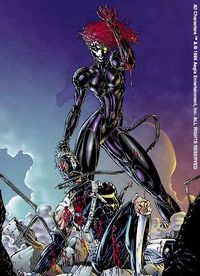 Amanda Reed was born in Queens, New York. Her mother died when she was still young. Her father was a substance abuser and was often violent towards Amanda. When she was seventeen years old, Amanda was a prostitute, living on the streets, until she was recruited for the Daemonite organisation known as the Cabal. She was bonded to a symbiote that could form a bio-metallic suit around her and became Taboo. The symbiote had vampiric tendencies though and often Taboo would found herself overcome with bloodlust in battle. She was framed for murder when she wanted to leave the organisation and sent to Purgatory Max, a special prison for super-powered beings in the Arctics.

Five years later, colonel Marc Slayton aka Backlash freed her, hoping to use her knowledge of the Cabal to help his girlfriend, Diane LaSalle, who had been left comatose after the Daemonite Lord S'Ryn had possessed her. Together they tracked S'Ryn down and fought him. S'Ryn managed to escape, but Taboo had proven herself to Backlash. They went for a few drinks, but ended up in bed. Once sobered up, Slayton felt guilty about betraying Diane and tried to keep Amanda at bay, but over time they grew closer.

Backlash and Taboo captured S'Ryn shortly afterwards and took him to the Halo Corporation, headquarters of the WildC.A.Ts. Their member Voodoo restored Diane LaSalle and S'Ryn died. Diane and Mark reunited, much to Amanda's displeasure. Diane broke up with Mark though, because of his actions during her coma. Meanwhile, Amanda was captured by superhuman mercenaries called the Chasers. She managed to escape with a little help from Backlash and a new friend, Dingo.

In their quest to clear Amanda's name, Taboo met Lilitu, a female vampire who knew about her symbiote's origins; eons ago the sire of her race, Calobis was allied with the Daemonite Helspont. Helspont would cure Calobis and his people of vampirism and in return Calobis provided host bodies to the Daemonites. Helspont failed, but used tissue samples of Calobis to a suit to hold his power. When Lilitu tried to resurrect Calobis from the suit though, Calobis appeared and told her that there were two suits. The ritual had a side-effect though and awoke a vampiric side inside the symbiote. From now on, the symbiote would take control at times.

Amanda and Marc started their relationship again, helped by the fact that Amanda was good friends with Marc's daughter, Jodie aka Crimson. The Chasers appeared again and told Amanda that she had been offered a pardon in exchange for her testimony against the Cabal. Mark and Amanda became part of the Department for Paranormal Search and Investigations (Department PSI), whose director, Antonio Giovanni, was an old friend of Marc's and had helped clear Amanda's name.

Department PSI later created Wildcore, a group of superhumans to battle the threat of the alien D'rahn. Backlash and Zealot became its leaders and Taboo was one of its members. After their battle with the D'rahn, Taboo became involved with an attempt to resurrect Calobis. Lilitu had enslaved the owner of the other suit, Samael. Taboo's and Samael's symbiotes were merged to recreate Calobis in order for Lilitu to take his power. Calobis, surprisingly, didn't want to be resurrected and gave all his power to Taboo to battle Lilitu. Taboo was victorious and now more powerful than ever before.

Some time later, Wildcore was sent to Purgatory Max, this time to arrest the Axis, a group of Nazi supervillains who had entered Purgatory Max and released its prisoners. Wildcore was wiped out, but Backlash and Taboo were both rescued by two prisoners; Hangman and Evo. Taboo hasn't appeared since, though Backlash has.

Taboo appears in the WildC.A.T.s TV series working for Helspont.

Retrieved from "https://imagecomics.fandom.com/wiki/Amanda_Reed?oldid=59584"
Community content is available under CC-BY-SA unless otherwise noted.