Amber Roos (We Stand on Guard) 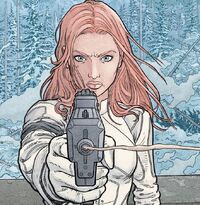 At least this has a chance to make a real impact.

In 2110, Amber Madeline Roos wandered off and got list in the city. She panicked but was eventually found by her family.[1]

In 2112, 6 year-old Amber witnessed the bombing of Washington, D.C. on TV. Her family wondered who would claim responsibility when suddenly bombs from the U.S. reigned down on Ottawa initiating a war between the U.S. and Canada. Her parents died in the carnage and she was forced to live on the run with her brother Tommy.[2]

In 2115, Amber and Tommy encounter another homeless Canadian while on a train passing through Manitoba. They told the man they were headed for Churchill, though the man told them they should go further up north. He then later recommended the two follow him on the next ship to Greenland.[3]

The two soon found themselves surrounded by the invading U.S. Army. When they began to light the place on fire, Tommy knew it was an opportunity to hide from their thermal vision goggles. He surrendered himself while Amber sneaked into an underground area to hide until the troops had left.[4]

Nine years later in 2124, Amber had survived on the run for years with her brother. Tommy was recently captured by the American army and she was forced to live on her own afterwards. She soon encountered the Two-Four Freedom Fighter organization and quickly gained their trust when she helped take down a All-Terrain Vehicle and killed the pilot without hesitation.[2]

Amber was then blindfolded back to the Two-Four Hideout as a precaution. At the hideout, she was enraged when Hungry was sneaking up on her. She was told by Dunn it was checking for any implants the American's could've placed on her. Later, after Victoria McFadden and Les LePage were not back yet, Amber suggested they go look for them.[5]

While searching, they found LePage, who told Amber and Dunn that the Americans had captured McFadden. As they returned to base, Dunn suggested they should leave the hideout, fearing McFadden could be tortured to the point where she'd give up their location. Amber and the rest of the team voted they rather stay.[3]

However, they were soon attacked from all sides due to McFadden giving away their positions. Amber jumped in a vehicle as Qabanni sacrificed herself in an All-Terrain Vehicle to bring down the roof and allow them to escape. However, on their path out they ran into a platoon holding Dunn hostage. The Army demanded they give up or they'd shoot Dunn. When Amber asked if there was anyway to save Dunn, and told, "no", she ordered the Two-Four to open fire and sacrifice Dunn to escape.[4] When the team refused to shoot as they could harm Dunn, Amber told them they could all be dead if they didn't fight back. Suddenly, the Americans were killed and Amber asked if Highway had anything to do with it. Qabanni revealed herself to survived the collapse as she broke through the rubble with the All-Terrain vehicle. Amber then noted that the Americans must have wanted at least a few alive as they sent men for them, rather than an airstrike. While Amber and the Two-Four discussed their plans, an American revealed himself to be alive and that Ma'am heard everything. Amber then killed the American.[6]

Amber and Highway hijacked the Whitehawk the Americans used and transported themselves onto Ma'am's ship. After noticing Highway was wearing one of Booth's Superman's shirt, Highway told her it was to honor Booth. Suddenly, Highway's head was blown off by Ma'am. When Ma'am told Amber to surrender, Amber told her she rather not and revealed herself to be wired with explosives.[6]

Amber told told Ma'am there were enough explosives set up to take the whole ship down. Troops came in to intervene but Ma'am shut them off. Amber told Ma'am she knows that she's "The American". Amber was then told that Ma'am use to be Canadian but was moved to New York when she was very young. Ma'am told Amber she's aware she has demands or she'd pull the trigger already. Amber then demanded that all Americans leave Canada alone. Amber told Ma'am that she believed Ma'am blew up their own White House as an excuse to invade Canada but Ma'am showed an interrogation where a Canadian confessed. Amber refused to believe the video. Suddenly, Qabanni managed to shoot the ship Ma'am and Amber were on. Amber went to pull the trigger but Ma'am jumped on her. Amber elbowed her and asked if what she said was true. When Ma'am said every word was, Amber still refused to believe. Amber then pulled the trigger, sacrificing her life.[1]