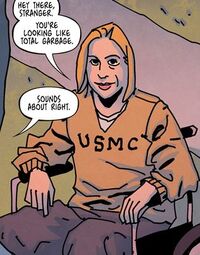 Amy served in the army with future wrestling-star, Dan Knossos.

When he returned to the states after training rookies in Japan, he stayed with Amy at her house. When he returned home bloody and battered one night, Amy showed him her gun room where she had stored illegal automatic weapons.[1] When she realized he was thinking of committing murder, she talked him out of it and convinced him to go the hospital to get treated instead.[2]

Retrieved from "https://imagecomics.fandom.com/wiki/Amy_(Ringside)?oldid=53917"
Community content is available under CC-BY-SA unless otherwise noted.