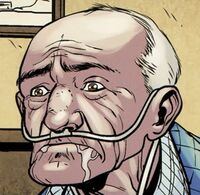 Anders Hine had built up a large sum of wealth. When his kids, Justin Hine and Jaime Hettinga began sleeping with each other, they knew Anders would never approve and give them the inheritance or insurance money from his death. They created a plan to slowly over-medicate him and kill him.[1]

After Revival day, Anders came back and appeared to be stuck in a vegetative state.[2] He was faking his state and kill Justin. His cover was blown by Rick and he headed after Jaime next after killing Rick.

Anders surprised Jamie at her house. He found a letter from Justin about them plotting to kill him and receive his life insurance money. Jaime admitted to helping Justin subdue him with drugs over years. Anders found he was unable to bring himself to kill his daughter. When local authorities arrived, they shot and maimed Anders, but he still escaped as his body was able to heal quickly as a Reviver.[1]

Retrieved from "https://imagecomics.fandom.com/wiki/Anders_Hine_(Revival)?oldid=43128"
Community content is available under CC-BY-SA unless otherwise noted.