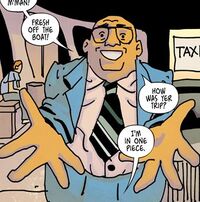 Andre Aligreti made money as a professional wrestler in the 80s. He handed his money to someone to help him invest and maintain his wealth.

When his friend Dan Knossos, aka the Minotaur, was returning from Japan he picked him up at the airport. He offered Dan a chance to sponsor his new business but was turned down.[1]

Retrieved from "https://imagecomics.fandom.com/wiki/Andre_Aligreti_(Ringside)?oldid=50611"
Community content is available under CC-BY-SA unless otherwise noted.