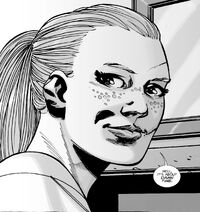 Andrea, a former law clerk, got stranded on the road with her sister Amy when she was returning her to college. They were picked up by Dale on his R.V. and helped form a survivor camp, to which more members joined as time passed. When Rick Grimes and Glenn brought some guns from their supply run at Atlanta, Andrea started to develop sharp-shooter skills. Eventually, Andrea lost his sister to a zombie attack, and made the first hard decision to sheer her before she returned from death.[1]

The ride in the R.V. became so much more as Andrea first regarded Dale as a father figure, but found her feelings had evolved to a romantic level. Comforting, sound, and rational, Dale was a natural companion to Andrea's energy and more youthful zeal.

Life at the Prison

Acting as the team sentry, her sniper skills saved the group on several occasions, from various roamer attacks to human threats. With time available to the group during their prison stay, Andrea used her shooting prowess to help teach each of the capable survivors to use their firearms with good accuracy.

After both Donna and Allen where lost to attacks by walkers, Andrea and Dale assumed responsibility for their twin boys, Ben and Billy, caring for them with greater skill and attentiveness than their own parents.

The prison stay proved physically debilitating to both Andrea and Dale, as each survived serious injury. Andrea succesfully fended off a near-lethal encounter with the psychopathic murderer Thomas, a confrontation leaving her scarred from lip to ear. While recovering, Andrea nursed Dale back to health after a roamer bite required him to lose his leg below the knee in an emergency amputation.

After the first failed attempt from The Governor to usurp the prison from the survivors, Andrea ended up with yet another scar, this time on her forehead due to a bullet that grazed Andrea's head. Sensing an imminent reprisal from Woodbury's soldiers, Andrea and Dale, along with Maggie, Glenn, the twins, and Sophia, boarded the R.V. and fled for safety to the Greene Family Farm.

Severely undermanned, Rick and the remaining survivors were overwhelmed by the Governor's forces. On the verge of surrender and slaughter, Andrea came crashing into the fray atop the R.V., guns blazing. She managed enough on-target shots against the Governor's army before the R.V. went careening into another vehicle, toppling Andrea from her perch and injuring her.

After they reunited with the remaining survivors of the prison, along with some new on-the-road additions, the group moved again from settlement to settlement, on their way to Washington, D.C.. Eventually, Andrea suffered more tragic loses: first, her disturbed adopted son Ben killed his brother with a knife, seeing it as some sort of senseless game. Ben would then be secretly killed by Carl, but he didn't confess it until much later. To top all of that, Dale was kidnapped by a group of sadistic cannibals who amputated his leg and ate it. However, Dale was bitten by a zombie before before being kidnapped, and he died due to the infection even after he returned to Andrea's side. Andrea stayed at his bedside until the last moment, and like she had to do with her sister Amy, she pulled the trigger following his death, ensuring that Dale would not return.