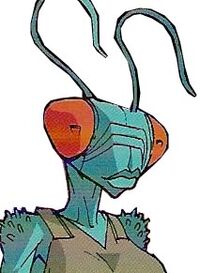 Andressa origin is unknown other than she was born on Thraxa and would become Nolan Grayson's wife sometime after he left Earth. She would have a child with him.

Andressa would witness Nolan and his son reunion. She would also help Mark navigate the planet when her and her son were in danger of being killed by the Viltrumites. She would lead him to the Caves of Roclaine and explain its history. Mark would distract Lucan and attack him, carrying Andressa and her son with her. Nolan than carried her after he had believe he killed Lucan. Nolan than tossed her to Mark and placed her back in the caves. After a day, Mark went to tell her that Nolan was captured. Two months after, Mark offered to help Andressa rebuild their city after he was destroyed by the Viltrumites. Andressa then asks Mark to take her son with him to Earth because she had aged too much for her to take care of him.