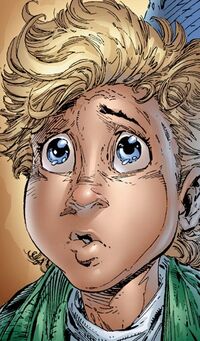 Andy Frank is the younger brother of Eddie Frank and was frequently received the brunt of his father's abusive beatings.

He brought Spawn home after finding him fall from Heaven and pass out. He kept Spawn in the garage until he felt well enough to walk. After Spawn discovered his father was beating him in secret, Spawn tattooed shameful comments on his father about how he is an abusive father. When he continued to beat Andy, Eddie finally took matters into his own hands and shot and murdered their father to free them from his fury.[1]

Later, the Frank brothers would head to New York City with hopes of seeing their 'friend' Spawn. They were caught up in an illegal drug trade by Snake the Dealer. After an emotional outburst from their friend Spawn, they accidentally murdered Snake and were traumatized by the event. They traveled back home to Alabama but were never the same again.[2]

Retrieved from "https://imagecomics.fandom.com/wiki/Andy_Frank?oldid=31526"
Community content is available under CC-BY-SA unless otherwise noted.