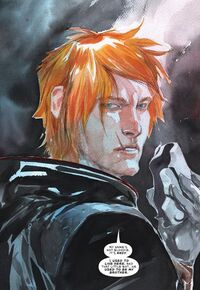 Upon tracking her down to Sampson, they were suddenly attacked by Gnishians who had been following Andy.[5]

Retrieved from "https://imagecomics.fandom.com/wiki/Andy_Tavers_(Descender)?oldid=62158"
Community content is available under CC-BY-SA unless otherwise noted.