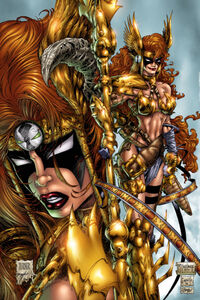 Angela is a primary Hellspawn slayer and achieved the top marks in her class. She has killed over 30 hellspawn and relishes the opportunity to hunt.[1]

Like most Angels, Angela is unable to recall her exact moment of birth. However, she was born from five mortal souls being melded together and created in the pure-light emitted from God's pulse. Each of the five chosen souls had died too early, sacrificing their life to save their loved ones'. Each had seen the specter of death, Deurges, just before being taken by death but were plucked away to Heaven by the Angel of their loved ones. Throughout Angela's life she saw visions of the five soul's previous life and felt connected to them and their emotional toils.[2]

Her first mentor in Heaven was Katherine. Katherine warned Angela to never back down against darkness and always show a warrior's spirit in battle.[3] God then guided her in understanding that emotions know nothing of time and are embodied by women. Women act as containers and occasionally need to unleash that emotional element. She discusses how the fire is stoked by anguish, and even life itself is born out of anguish. She explains to give birth to the universe, another child, she must destroy those who stand atop it, namely Deurges, the man that has haunted her since her creation and the five souls that created her. She vowed revenge on Deurges from that point forward and planned on murdering him.[4]

For years, Angela has hunted Hellspawn. One of the earliest was when she hunted and murdered Medieval Spawn in Sixteenth Century England. She followed the rules of engagement and lured a newly created and confused Hellspawn to a remote location. She then used her Dimensional Lance to kill him.[5]

In 1997, to keep Heaven's agreement that a creature of Heaven should not hunt Hellspawn unless they have a Hellspawn Hunting Permit, Angela visited Terran Affairs Headquarters to show she had a valid permit. Her goal was to hunt the newly resurrected Spawn on Earth. Upon verifying she had a valid permit, Gabrielle allowed Angela to proceed and requested she make the kill quick. However, she was confused by the resourcefulness of the Spawn and fell into his cape. She escaped by teleporting back to Elysium but lost her Dimensional Lance in the process.[5]

One year later, On her 100,000th birthday, Angela treated herself to hunting a Sandalphon Dragon on Sandalphon Five. After a reckless battle that ignored her previous training of how to hunt, she was surrounded by 300,000 agents of Heaven and placed under arrest for treason.[1]

Upon being transported back to Elysium, Angela discovered Gabrielle had betrayed her and falsified information about her hunting expedition against Spawn. Upon consulting with her support network, Angela's friend assisted in traveling to Earth to bring Spawn to Heaven to testify on her behalf.

During her trial, Heaven revolted at the sight of a Hellspawn in its courts and immediately called for its execution. Angela escaped with the help of Spawn by teleporting through his cape in the same manner he used when he first fought her in battle. However, this escape with Spawn made her appear even more guilty to Heaven and she was declared a traitor of Heaven and ex-communicated. While the duo escaped, they began discussing their plights and eventually formed a physical and emotional relationship with each other.[6]

After their evening together, they awoke the next day with renewed vigor of distrusting each other. With the help of several friends in Heaven, she escaped and returned to Heaven and Spawn was displaced in Alabama. Angela formed a plan with her friends and headed to Terran Affairs Headquarters to confront her accuser, Gabrielle. She secretly recorded the conversation with Gabrielle in which she confessed to all her crimes. Angela turned the evidence over to her lawyer, Callindra, and instead of returning to Elysium she decided to stay a free agent and continue free-lance hunting.[7]

Angela continued hunting for fees, but found little satisfaction as she felt her true value was in hunting Hellspawn. Angela soon found herself on Pentagas-Fraser contracted to battle the Argus, a spider techno-virus that feed off of souls and blood. During the battle, the normally stoic Angel was caught off guard from seeing Deurges. She suddenly had flashbacks to her creation and the 5 melded souls that created her. Since each soul had seen Deurges as it's list thing in the living realm, she panicked and froze.[8] The Argus took this moment to knock her off balance and ensnare her in its techno-web. It soon unleashed the Kron and exploded to cause a singularity threatening the melding of universes in the eternal triumverate.[9]

Angela was pulled momentarily to Earth to witness bolts of light striking Al Simmons and ripping the Terran Affairs Headquarters in half.[10] Upon returning to Limbo, she faced Lilith who betrayed Heaven and served as an anti-angel. During her battle with Lilith, it was revealed she carried with her an Elysian-Lock. A device that contained all the timelines of Angels. She once again bore witness to Deurges watching over her during the battle. Remembering Katherine's teaching from when she first became an Angel, she harnessed her emotional rage and anguish and threw Lilith into the Argus and smashed the Elysian-Lock in a reckless gambit to stop the universe from imploding. She was successful and restored the tear of universe to normal.[11]

While Angela continued her Free-Lance activities, she was suddenly summoned back to Elysium by Metatron. She was informed that Celestine has gone rogue with a host of angels to wage war on Heaven. Angela tracks Celestine to the Isle of Paradise, where she is subjecting the local women to fight her battle for her. When Glory arrives, she attacks her thinking she is fighting for Celestine. The two soon realize they both have the common enemy of Celestine and join forces to free the locals from Celestine's control. During the battle, Celestine slips away.[12]

On Orbital Angel Station, Celestine retrieves her true goal, Elemental Fire. The U.S. Government dispatches Youngblood and Team Youngblood to investigate the station, but find Celestine has already fled to the Middle East where Angela heads to cut her off.[13][14]

In the Middle East, Glory and Angela battle the angels Celestine, Astra, and Crystal. They are soon outnumbered as Celestine uses the Elemental Fire to raise the dead to fight for her. As the dead are slowly beaten back by Angela and Glory, Celestine throws a fit. Glory points out that something is amiss as an angel would not summon the dead nor throw a fit. Angela and Glory are shortly thereafter saved as all the corpses cease to move as Maximage cuts off the Elemental Fire power source to Celestine.[15]

After being knocked out by Celestine, Angela is saved by Maximage who recently used her powers to reveal that Celestine was being controlled by Malebolgia.[16]

Angela and Celestine agree to travel to Hell to retrieve Celestine's soul from Malebolgia. They are initially toyed with as Malebolgia reveals he is all powerful and will soon overthrow his boss. However, Lucifer suddenly appears and vanquishes Malebolgia as punishment. Lucifer then informs Angela that Elysium is one of the 10 levels of Hell and Angela becomes speechless for the first time in ages. Having freed Celestine, Angela returns to her free-lance hunting duties.[17]

Angela was killed during the battle with Malebolgia[18].

Angela is a reoccurring adversary and ally of Spawn, and so is featured often in the series. Her debut was in issue Spawn #9, but she has since appeared in issues #62, #89, and #96 through #100.

A three-issue Angela limited series was published, written by Neil Gaiman and illustrated by Greg Capullo. The series was later reprinted in a trade paperback (ISBN 1-887279-09-1).

There was also an Angela stand-alone comic (1995).

Angela has also been featured in several crossovers. The "Rage of Angels" miniseries saw Angela meeting Glory. There was also a crossover Aria/Angela, featuring Angela in the Aria comic series.

Currently, Angela has been added to the Prime Marvel Universe, since the rights to the character belong to Marvel (see "Legal rights" below). Her origin differs from the Image origin, as she is the estranged daughter of Odin, who was raised in a realm named "Heven" and later wound up on Earth during the fluctuations in space and time resulting from Wolverine's time-traveling during the Age of Ultron event. It is important to note that the Angela featured in the Marvel comics is not the exact same character as Angela from the Image comics, but rather an alternate universe version.

In 1993 McFarlane contracted Neil Gaiman (as well as other recognized authors like Frank Miller and Dave Sim) to write one issue of Spawn. While doing so, Gaiman introduced the characters Angela, Cogliostro, and Medieval Spawn. All three characters continued to be featured prominently in the series after Gaiman's involvement, and had many tie-ins with McFarlane's toy company. Cogliostro had a prominent role in the live-action movie in 1997. McFarlane had initially agreed that Gaiman retained creator rights on the characters, but later claimed that Gaiman's work had been work-for-hire and that McFarlane owned all of Gaiman's creations entirely, pointing to the legal indicial in Spawn #9 and the lack of legal contract stating otherwise. (Some argued that this change of heart was motivated by his desire to gain full ownership to the characters by using Miracleman as a bargaining tool.) McFarlane had also refused to pay Gaiman for the volumes of Gaiman's work he republished and kept in print. In 2002, Gaiman filed suit and won a sizeable judgement against McFarlane and Image Comics for the rights due any creator. All three characters are currently co-owned 50/50 by both men.

Retrieved from "https://imagecomics.fandom.com/wiki/Angela?oldid=66905"
Community content is available under CC-BY-SA unless otherwise noted.