Part of the Rage of Angels 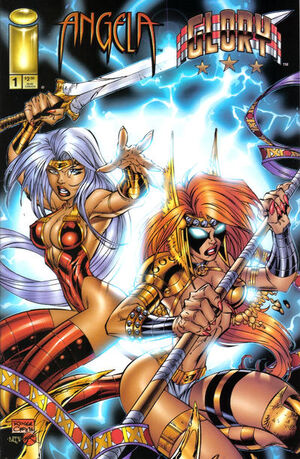 Astra and Crystal perform an illegal procedure to bring Celestine back to life. Upon returning Celestine recalls how she fought for God in the great rebellion. After being betrayed by him by not being revived after her death, she now sees the rebels were right and decides to wage war against God. She tells her angel backers they must obtain the power of magic as it is one of the few things that'll will bring him down.

Meanwhile on Kyntek V, Angela continues her freelance hunting when she is suddenly transported to Elysium. Metatron informs her that Celestine has risen against Heaven with a host of angels and destroyed much of it. Metatron implores Angela to help save it.

Lady Demeter watches from the bushes. She decides to call on Glory for assistance and tells her Celestine is using a mind trick to make the Amazonian women follow her. Glory responds to her call and immediately teleports to the Isle.

Upon arriving via the slip gate, she is attacked by Angela. After exchanging words, they realize they have a common enemy and join forces. They attack Celestine right as she renders a sentence of death to Lady Demeter. Demeter implores Glory to use the forces of nature. Upon summoning the cleansing winds and cloudy skies, her sisters are free of their mind slavery.

Celestine slips away during the commotion to Orbital Angel Station. She prepares to use the Elemental Fire.

Retrieved from "https://imagecomics.fandom.com/wiki/Angela_%26_Glory:_Rage_of_Angels_Vol_1_1?oldid=49588"
Community content is available under CC-BY-SA unless otherwise noted.