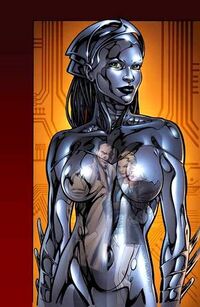 Angela "Angie" Spica was born in Queens, the youngest child of seven. Her family wasn’t rich but they were happy, her father drove a bus and her mother worked in a launderette.

From a young age Angie was obsessed with superheroes. While dreaming of becoming a superhero, Angie became the smartest child in her school, she was building circuit-boards while other children in her class were still playing with toys.[1]

After the first Engineer was killed, Angela "Angie" Spica's home computer filled up with all his nanotechnology notes and started linking it to her work in human-machine fusion. Spica had known him in real life, but she didn't know he was the Engineer until then. She distilled an incalculable number of intelligent devices into nine pints of liquid machinery and replaced her blood with it. This nanotechnology gives her vast mechanical abilities: the liquid metal covers her body at will, allows her to fly and to create many things, such as radio-telepathy bugs, weaponry, rocket engines, replacement lungs to cope with unfamiliar atmospheres and even additional copies of herself.

Jenny Sparks recruited her as a founding member of The Authority.

In the events of "Transfer of Power", Spica was replaced by "Machine", a woman from Japan who received the nanotechnology extracted from the Engineer's body. Spica's blood was temporarily replaced with that of an HIV Positive heroin addict. She was given memory implants and forced into the life of a minimum wage worker in a Seven-Eleven, with an abusive husband and six children (all of them actors paid by the Powers-That-Be), until she was saved by Swift.[2] Spica's deep desire for revenge on Machine was thwarted when it was learned she had been killed by fellow teammate Apollo.[3]

When Captain Atom was displaced into the WildStorm Universe after destroying a kryptonite meteor in protecting his Earth's destruction, the Engineer developed a deep, even if somewhat short, relation with him. Spica first met Atom after the Authority teleported him through a door to the moon. At first Spica tasked from Jack Hawksmoor himself to keep an eye over Captain Atom, using her charms if needed to keep him close and devise a plan to bring him back home, or kill him should he become a menace for the Wildstorm Universe.[4] Spica, unable to find his proper universe, used her nanotechnology to apparently disable the fragment of the Void lodged in Captain Atom's body, defusing the threat posed by his survival in the WildStorm Universe, and starts a relationship with him, sharing some intimate moments (much to Hawksmoor's annoyance/jealousy) and trying to mold him into the proactive hero needed by her world.[5] However, upon discovering that the Mark of Void was never purged by his system, and finding Captain Atom embracing Nikola Hanssen, the current host for the Void entity, Angela turned against him, and mixing jealousy to anger and self-righteousness, attempts to slay him.[6] Captain Atom, still deeply in love with her, disables her powers, until Void was able to reboot the universe, leaving Angela no memories of the events surrounding the destruction and recreation of her world, and possibly, no memories about Nathaniel Adam.

Due to the cataclysm of World's End, Spica lost her powers and became an engineer, trying to fix the Carrier and help the refugees living in it. However, she was able to use her machine blood to reactivate it - partially - and this in turn awoke her powers. She can use her superhuman powers for brief periods. But, this never last long, so she now wears normal clothes over her metallic skin. When Angela was captured by Sliding Albion prince Lorenzo Slzfi and forced to work on a miniature Caged Baby Universe to power a Shift-Door to his dimension, she made communication with the Caged Baby Universe and find it to had a similar origin to the Carrier and had been captured ever since by the Establishment in the 1950's. In so Angela was asked to help it, which she agreed allowing the Caged Universe to restart and upgrade her abilities.[7] After regaining her powers, Angela confronted The Golden and convinced them in siding with her as she can help them in finding one of their missing sibling. Both she and The Golden fought through Lorenzo's forces, and the former used her upgraded tech in accessing a shift-door and finding Swift and along with the lost Golden from Sliding Albion. At this point, Lorenzo took the chance to return to Sliding Albion. But, the Engineer quickly closed the shift-door in which Lorenzo was split in half.[7]