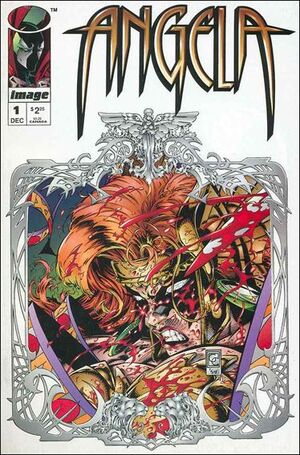 On the icy planet of Sandalphon Five, Angela hunts the elusive and rare Sandalphon Dragon. She received a rare Hunting Permit to perform the action. Her Angelic Ribbons keep her warm as she decides this is how she will celebrate her 100,000th birthday. She recalls the hunting guidelines and how she should never provoke the dragon while it is in it's cave. She ignores and fights the dragon head-on. Angela stabs it directly in the eye to get to its brain. The dragon falls on top of her and knocks out her Angelic Ribbon.

Suddenly, Surielle appears with 333,000 guards and drones from Elysium. They place her under arrest and Angela reluctantly agrees as she and her ribbon were slightly injured in the struggle with the dragon. She snidely remarks not a single one of them wished her a happy birthday.

As they arrive on Elysium, Surrielle explains she is charged with high treason for hunting a Hellspawn without a valid hunting permit. Angela is shocked as she checked in with Gabrielle before embarking on that mission.[1]

Elsewhere on Elysium, Anahita and Kuan Yin are in shock upon hearing the news of Angela. As her closest friends, they know she would never hunt without a permit and know this stinks of a setup. They visit Saranyu in records who agrees to release the case information to them. The media shows them Gabrielle's testimony how Angela illegally hunted Albert Simmons. They realize to free Angela, they'll need Al's help.

In New York City, Kuan Yin and Anahita teleport to Spawn. They tell him they are going to take him to Heaven.

Retrieved from "https://imagecomics.fandom.com/wiki/Angela_Vol_1_1?oldid=42807"
Community content is available under CC-BY-SA unless otherwise noted.