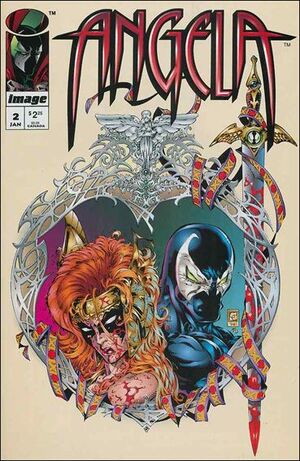 Anahita and Kuan Yin teleport Spawn to Elysium. They sneak him into a room and tell him they need his help by testifying Angela had a Hunting Permit. Spawn's suit begins reacting and creates spikes and other defensive gestures. The angels inform him that the suit detects it is amongst enemies and is naturally attempting to defend itself.

Angela is brought to meet her legal defender, Callindra. She's not surprised this is an unfair trial as Callindra is a young angel with no experience. She knows she's being setup.

Metatron meets with Malebolgia and tells him an unauthorized Hellspawn has infiltrated Elysium. Malebolgia sees it's Spawn and tells her to do what she wants with him. He claims to not have sent him there so there for did not break the treaty of invading her lands.

Spawn appears at the trial with a disguise on. Gabrielle gives her testimony and admits that she hates Angela. She informs the court she never came to her office to present the hunting permit. When Spawn comes to testify, his suit reacts and reveals his true identity. The courts of Heaven react and tell the guards to kill the Hellspawn as it is an abomination.

Angela trusts her instincts and aids Spawn as he's the only one that could set her free with the truth. They escape into Spawn's cape with teleport them to some location in hell. While they exchange stories in their temporary haven, they find themselves comforting each other in warmth and engage in a short relationship.

Retrieved from "https://imagecomics.fandom.com/wiki/Angela_Vol_1_2?oldid=42808"
Community content is available under CC-BY-SA unless otherwise noted.