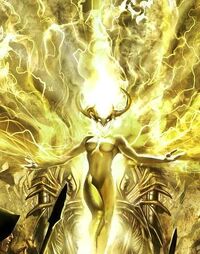 The Angelus is a primal force of Light and has been in an eternal war with her counterpart, The Darkness since they were created. However, at some point during her history, the Angelus and the Darkness united to create a balance, this balance became known as the Witchblade.

Like the Darkness, the Angelus creates a symbiotic relationship with a host (choosing female hosts as opposed to the male Darkness weilders) in order to carry out its life mission on Earth. The Angelus' main goal is to rid the world of evil and darkness regardless of mortal rule or law and recreate everything in their vision. In that time the Angelus has only come close one time to truly eliminating the Darkness. The trophy (Darkness Corpse) is kept in the sacred hall as a memento of this achievement.

In modern times the ancient Angelus force found herself at odds with the current Darkness wielder, Jackie Estacado. Eventually the Angelus was defeated by Jackie, and was hostless for some time until Sonatine tried to coax the entity to join with Appolonia Franchetti. Because Appolonia desired the power too much, the Angelus chose her catatonic mother, Lauren Franchetti, instead. Soon after, the newly reborn Angelus was fooled into thinking she had finally killed the Darkness, after Jackie made a copy of himself. She soon fled with Appolonia to an ancient temple in the Amazon rainforest, where Lauren gave herself completely to the Angelus entity. The Angelus came in contact with the Magdalena, Sister Mariella. The Magdalena was seeking to reforge the Spear of Destiny which had been shattered during her first encounter with the Darkness. The fight ended with no clear winner but The Angelus ordered Appolonia to leave because she was touched too deeply by the Darkness (in this case evil) and that should they meet again she would kill her.

The Angelus possessed Lauren would once again attempt to kill The Darkness and would also come into conflict with the new Magdalena (Patience). During the fight Appolonia ran the Angelus through with the Spear of Destiny. The Angelus temporarily takes possession of Patience, but the spirit is forced out of Patience's body.

During the time the Angelus was without a host her followers sensed that the balance between the Light and Darkness has been tipped in favor of Jackie Estacado, and have begun preparing for war while the Angelus searches for a new host. She first takes possession of Velocity but is forced out by members of Cyberforce. She then takes possession of convicted murder Celestine. Shortly after the birth of Hope Pezzini (Sara & Jackie's daughter) The Angelus claims her only to have something mystical occur. After the explosion only Angelus and her foes remain. Celestine & The Angelus now co-exist as separate entities with Celestine now able to become the Angelus as needed but retaining her own free will. Celestine however knows that the Angelus does have the ability to submerge her will at any point, but the Angelus has chosen not to after her encounter with Sara Pezzini's daughter.

During the events of Broken Trinity, two new artifacts of power emerged and entered the battlefield of the Witchblades (split between Sara Pezzini & Danielle Baptiste), The powerless Darkness host, and Angelus. These two artifacts are the Ember Stone and the Glacier Stone. Ember sought to claim the artifacts present as well as the remaining 8. The Angelus teleports Ember away from the battlefield and the host is then killed by Jackie Estacado wielding the Blood Sword (one of the other 13 artifacts).

Disembodied once again, the Angelus force passed first to Finch, Danielle Baptiste's roommate and potential love interest, and then to Danielle Baptiste herself when she was mortally wounded and stripped of the Witchblade by Sara Pezzini.

Unlike the previous hosts, the Angelus force has chosen not to submerge Danielle persona, but to actually let her control it, like Jackie Estacado does for the Darkness.

The Angelus is the embodiment of light and totalitarian order. As such, she possesses many supernatural godlike powers even under dark conditions. The exact ferocity of her power and beauty remains unknown, though she has been described as being as beautiful as The Morningstar and more violent and bloodthirsty than Kali.

While not vulnerable in the darkness (like the Darkness itself is in the light), The Angelus looses power the longer it is submerged in darkness. The more energy the Angelus expends while in the dark, the quicker it is expends its energy upon which its host then is vulnerable to harm and even death.

Retrieved from "https://imagecomics.fandom.com/wiki/Angelus?oldid=67170"
Community content is available under CC-BY-SA unless otherwise noted.