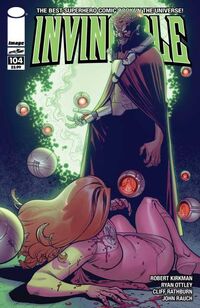 Angstrom Levy used his portal creation powers to save an alternate version of himself in Times Square. While Robot and The Immortal are killed by an evil Invincible. He takes his alternate self to a dock while the Guardians of the Globe handle an alien invasion. He reveals to his alternate self that they are many other versions of him. Next, he freed the Mauler twins from their imprisonment and take the duo to his lab. He asks the two build him a machine that will allow him to get the knowledge his alternate version home dimensions. They accept, but say they need more equipment. After the Mauler twins complete the project, Angstrom places the mind transfer device on his head until Invincible arrives. Angstrom would use his powers to summon several Maulers from other dimensions to keep Invincible from halting the process. He notices that the Maulers are attempting to kill Invincible, and he removes the device from his head. The result causes some Maulers to die and gave Angstrom a creased head and back. Angstrom would also lose some memory of the event. He leaves to a dimension to get his injury fixed by a race called the Technicians, hoping to get revenge on Invincible.

Using his extradimensional knowledge, Angstrom finds out Invincible’s identity as Mark Grayson. He goes to Mark’s house and captures Mark’s mother and brother. He would then call Atom Eve and tell Mark of his family’s condition. Angstrom would send Mark through a series of dimensions, threatening Debbie and Oliver. While Angstrom is distracted, Deborah attempts to hurt him by using attacking him with a lamp. Angstrom is unaffected and breaks her arm. Angstrom goes to check on Mark and Mark grabs him. Seeing what he’s done, Mark crashes Angstrom through the Grayson house and Angstrom reveals his super strength to Mark. The duo would crash through a series of dimensions until they land in a wasteland. Angstrom threatens Mark’s family and an enraged Mark beats him to death. However, it is revealed that Angstrom had survived the encounter and had the same extradimensional patch him. He would have a disfigured face from it. He would have orb cameras watch Mark’s house to prepare himself for planning. Angstrom would collect several alternate Invincibles, bargaining that they get to expand their empires in exchange for laying waste to Mark’s reality.

Months after his apparent death, Angstrom finally enact his plan into action. While the evil Invincible would level Earth, Angstrom would command behind the scene. Afterwards, he would ask remaining Invincible to gather together and ask that they find his dimensional Invincible. They argue that he has a bargain and attempt to kill him. Angstrom sends them into the wasteland dimension that he was apparently killed in. Bulletproof, Oliver, and Mark charge towards him and he uses her orbs to find them off. He grabs Angstrom by his throat and Oliver suggest that Mark kill him. Mark readies himself to do so. However, Angstrom gets away in time but uses his forearm in the process. He asks the Technicians to patch him up and get ready for eight remaining Invincible to fight again. The Technicians refuse and state that Angstrom works for them now.

Angstrom would plot against Mark, but still owed the Technicians. After fulfilling his part, the Technicians release him. Angstrom will arrive to a flooded city and see what’s happening. It is revealed that Mark is dead, much to Angstrom’s surprise.

Angstrom arrives his house and picks a newspaper to find out that Mark is very much alive. He sneaks into Mark’s house and sees Eve walk through the door. He attempts to suffocate her, but Mark arrives. He strands Mark into another dimension and talks with Eve. Angstrom wonders why Eve hasn’t used her powers and uses his dimensional knowledge to find out she’s pregnant. Eve argues with Angstrom by telling her what Mark had told her. Eve stated that Angstrom stopped the process by removing the device, which Angstrom said was a lie. Eve goes on to say that he was responsible for Rex’s death, but focusing on revenge is not the way to do things. Eve also cited that his dimensional access powers can be better used for better purposes than revenge. Angstrom has a change of heart and decides to release the two Marks. Angstrom explains that the process may made him lose his memory and that he had lost his way. Angstrom goes on to say that Mark is evil in many multiverses and it should concern him. Angstrom apologizes for what he’s done.

He surrenders and opens a portal for Mark’s alternate version. The alternate dimension Mark takes Angstrom into the dimension with him instead. When Mark and Robot arrive to the dimension, it is revealed that Angstrom is alive, but is being tortured in order to expand the Viltrum Empire Mark rules over. Robot betrays Mark by emitting a low pitch pulse. He kills the alternate reality Mark and scientists. Afterwards, he decapicates Angstrom, erasing Mark’s chance of returning back to his reality. In the Final issue it is revealed that Levy has a son who is also a supervillain and seeks vengeance on Invincible blaming him for his Father's death.

Retrieved from "https://imagecomics.fandom.com/wiki/Angstrom_Levy?oldid=67132"
Community content is available under CC-BY-SA unless otherwise noted.