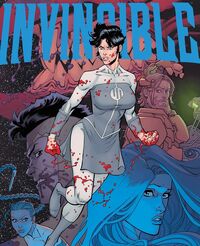 Anissa was born on Viltrum and is thousands of years old. She would be one of the many warriors that would witness Thragg's rise to Grand Regent of the Viltrum Empire. [1]

While Mark Grayson and Debbie Grayson ate lunch, Anissa interrupted to get Mark's attention. She threatened to kill Mark's mother so that he would come with her. She met Mark in the sky, hoping to convince him to aid in the Viltrumite takeover. She apologized to him. She began her speech about how Viltrumites would turn Earth into a utopia for centuries and rid the planet of disease, war, and death. A worried Mark asked what happened afterwards with her revealing that planet's eventual destruction. Their conversation was interrupted by Cecil Stedman and Mark had to save a cruise ship being attacked by a monster. She offered her assistance, hoping to convince Mark to help towards her goal. She slain the monster with ease by flying into its head. After, she and Mark helped the passengers and moved the cruise ship onto an island. Mark, exhausted from the ordeal, sat down while she stood, commending him. She asked Mark one last time if he was willing to come to the Viltrumite side. Mark refused and Anissa lost her patience [2]. With a light warning filled with attacks, she reminded Mark that he didn't have a choice in this matter. She told Mark that he has no idea how much danger he was in. She, then, told him that another agent will come to check on his progress in either five months or five years. She left, hoping that Mark realized the danger before then. General Kregg met her in the Viltrumite Warship as Anissa reported that she couldn't convince Mark. Anissa reassured Kregg that it was only a matter of time before he came to their side. Anissa noticed Allen flying back to Talescria. They battled and she was shocked by his new found strength. She defeated Allen, not knowing that he had purposely thrown the fight and took him to prison.[3]

Anissa is seen in Talescria, attacking the Coalition of Planets Headquarters. After, she grabbed Tech Jacket. She later attempted to kill him by bear hugging him, but is attacked by Thaedus and released him. She grabbed Thadeus and Tech Jacket, but was attacked by Nolan. Enraged, she attacked him, calling him a disgrace due to his traitorous status. She later attacked Allen after the Viltrumite warship was destroyed by Mark and Kid-Omni Man. She retreats with Thragg and other Viltrumites to Viltrum [4] There, she and other Viltrumites readied themselves for the Coalition to attack.

When the Coalition of Planet Warriors arrived, she launched into Anissa and suppressed him with a neckhold. She was later distracted by finding that Mark had killed Conquest and was attacked by Omni-Man. Distracted by the battle between the two sides, she was later seen when Invincible, Thadeus, and Omni-Man flew through Viltrum, successfully destroying the planet. She survived the explosion of the planet and later moved to attack Allen along with Kregg and other Viltrumites. Space Racer fired a beam from his gun, distracting her from the death of fellow Viltrumites. There, Allen escaped with Spacer Racer. After Thragg beat Nolan and Mark to the brink of death, she was seen fleeing with him and other Viltrumites after Thragg decides to spare them. The Viltrumites went to Earth and were secretly living among humans in order to replenish their population. Anissa is seen sitting on a bench, aggravated by the two men flirting with her.[5]

Anissa, Kregg, and Lucan are in the Viltrumite moon base being reprimanded by Thragg. Thragg. He reminded the trio of the reasons why the Viltrumites had come to Earth: to interbreed with humans. Thragg goes on to say that their behavior is unacceptable, citing Anissa's refusal to procreate with humans. Anissa retorted by stating that she never wanted to produce offspring and that it isn’t as simple as what the men were doing. Kregg and Lucan explain their stories, much to Thragg and Anissa's disgust. Thragg demands that they leave[6]. Later, she was seen on the moon after Thragg attempted to kill Nolan. She was accompanied by Kregg, Thula, and Lucan. Kregg stopped Thragg’s attack on Nolan. Baffled by this, he asked Kregg to explain himself Thragg lied and said that Nolan was attempting to kill him. Thragg tells him that Nolan is the son of Argall and that he is too weak to lead. Anissa and the other turn on him and attempt to kill Thragg. along with the others. Nolan then ask that they stop and spare him. They bowed to Nolan as he was chosen to be the Emperor of the Viltrum Empire. She and other Viltrumites attended Nolan's inauguration ceremony on the warship.

She is later watching Nolan and his son arm wrestling. She aided the Guardians of The Globe's battle against Doctor Seismic. She flew through a Magmamite monster summoned by Doctor Seismic, similar to what she did when she arrived to the Earth. Mark, shocked at this, flew up to sky level to find out who did it. There, she revealed that she had slain the beast. Mark asks what her motives were, citing that he saw her watching him in him and his father arm wrestling.[7] She rebuffed him and said that she watching Mark, not Nolan. She kissed him, much to Mark's surprise and dismay. She flew off, hoping to see him again.

Robot Takes Over The World

Anissa would find Mark and see him for the first time in 6 months. She asked him where he had been. Before Mark could speak and finish his statement, she stopped him by telling him about the Viltrumite mission of procreating with humans and how she wasn't performing on her end. Mark attempts to leave, but Anissa stops him. She began to tell him about her refusal to mate with humans. She told him that even though he was young and weak, she’d settle on mating with him because of his Viltrumite heritage. Mark refused her and flew off, citing that he is still with Eve. Anissa attacks him to stop his flight. Mark asks her to leave him alone, saying that he didn't want to fight. She retorted that she didn't want to fight either, but she couldn't stall the mission, citing that Nolan may not be as forceful as Thragg, but the mission remained. She attempts to seduce Mark, but he refuses her. She loses her patience, and head butted Mark. Seeing that seducing him won't work, Anissa realizes now that she must force herself onto Mark. Mark asks her to leave him be, but she refuses and charges. Mark lightly fought her off, hoping that she would leave him be. Anissa wasn't swayed, but much rather enjoying the battle. She caught Mark's punch, noticing that he was stronger than before. She used her superior strength to overpower him and the duo crash on an unknown farm, with her laying on top of Mark. She pushed back his arms and demanded that he stop resisting her.

Mark refuses to give up and emphasizes his refusal. She continues her assault, with her elbow at his neck. Anissa reaches to Mark's genitals, with Mark still attempting to push her off. She tore off their costumes, and proceeds to rape him. While Mark watches in horror, Anissa is aroused. Traumatized, Mark begins to cry. Anissa tells him to man up and implying she will be try again. She flies off, leaving a traumatized Mark to reflect [8]. Anissa saves a near death Monster Girl from suffocating in space. Anissa reports to Nolan about Monster Girl being close to death when she was found. She also reported that the area where one of Robot’s drones being located and the Viltrumites were awaiting his order. Mark, remembering what she had done, started to shake at the sight of seeing her. While another Viltrumite approached Nolan, she used the opportunity to whisper “missed you,” to Mark, much to his disgust.

Later, Anissa left with Nolan and the other Viltrumites to confront the drone. Robot, only wished to talk, asked about Monster Girl's condition as he was thrown into space. Nolan stated that she was stable. Robot discussed a plan to work together with the Viltrumites, knowing their mission to cross breed with humans. After long deliberation, Robot and Nolan came to an agreement on their terms. Mark flew to the drone, attacking it, surprising the Viltrumites. Anissa attempt to help Mark up, but Mark slapped her hand away in anger. The battle between Robot's drone and Mark was stopped by Nolan talking with Mark [9]. A day later, She runs into Mark on the warship, much to his anger. He grabs her throat and slams her into a wall, demanding that she back off. Nolan shouted for Mark, but Mark told him to “stay out of it.” Anissa grinned and proceeded to tell how Mark's aggression aroused her and made her want to repeat their prior incident. Mark lets her go out of shock and leaves with Nolan. She smiled as they left [10].

A couples months after Mark had left Earth, Anissa gave birth to Mark's son, Marky. Sometimes between that time, Anissa would marry a man named Scott and have a daughter born recently. After hearing Mark was back on Earth, She rushed to the Viltrumite Warship and Eve attacks her. Nolan and Mark stop the fight and Nolan grabs her by the neck after Eve suggested that something happened between Mark and her. Mark defends her by lying and Anissa is asked to leave. She flies back to see her husband and two children [11].

Anissa talks to her husband, and she is glad that her husband helped her become a better person, and regretted what she did in the past, especially to Mark Grayson. She gets a call from Nolan Grayson, and she meets with her fellow Viltrumites Kregg and Lucan to prepare to defend Earth, since Anissa actually cares for Earth now. Unknown to Anissa, Mark tells Nolan that Anissa raped him, but Nolan gets over it, saying Anissa had changed over the last five years.

During the battle, Anissa fights against Thragg's children, and saves Eve from being killed but is cut open in the process. Eve tries to save her but Anissa's wounds are too severe. Anissa tells Eve that she was sorry that she raped Mark, but she did not regret it because she gave birth to Marky. Eve still puts Anissa in a bubble, but Anissa succumbs to her wounds and dies. Her death is confirmed by Allen the Alien.