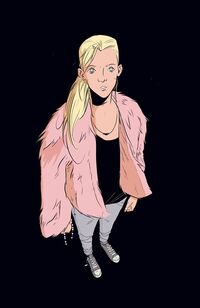 Anita Christ is a young girl who was adopted by the unlikely guardian Antoine Wolf.[1] Wolfe didn't let Anita stay long and tells her he also was abandoned but she'd need to find her own way.[2]

Gibson wanted to protect his investment and had Simmons follow Wolfe. They broke into his home when he was gone and kidnapped Freddy as ransom. Anita was able to escape and find Wolfe to warn him about Gibson and his meddling.[3]

Retrieved from "https://imagecomics.fandom.com/wiki/Anita_Christ_(Wolf)?oldid=44431"
Community content is available under CC-BY-SA unless otherwise noted.