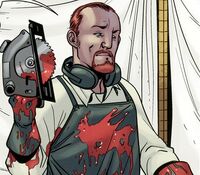 Anthony Check was the oldest of his three siblings and the brains behind their operations.

The Check family was torn apart when their father left his three boys at a young age. He always had feelings of becoming a woman and he knew his rough-and-tumble family would never accept him. When he returned years later finally facing his fears, the Check brothers were embarrassed and secretly murdered their father. They'd frequently return to his grave over the years to see if he came back as a Revivor.[1]

The Checks were a greedy bunch. They rented out Derek Hinch's shed so that they'd have a work room to perform their illegal activities.[2] They were amputating dead body parts and selling them for money to people outside the quarantine zone. People became fanatical about longer lives and believed the meet to have potential value in giving everlasting life.

One day, a truck outbound crashed at a quarantine zone checkpoint and the Checks became worried that security would increase. They felt the border patrol would begin cracking down on them just as they hit payday with finding a real Revivor who was willingly giving them his body parts.[3]

In the house next to the shed, Nikki Jensen was baby sitting Cooper Cypress when they stumbled into shed where the Checks were chopping up body parts.[3] Soon, Em Cyprus was dropped off at Derek Hinch's home. When Em heard a noise from the shed, she snooped and discovered the Check brothers had Derek Hinch, Cooper, and Nikki held hostage. Em killed the Check brothers and saved her trio of friends.[4]

Retrieved from "https://imagecomics.fandom.com/wiki/Anthony_Check_(Revival)?oldid=61847"
Community content is available under CC-BY-SA unless otherwise noted.