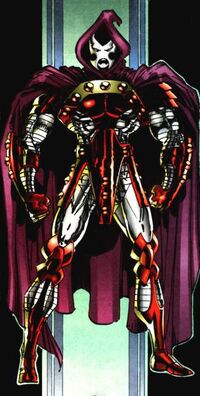 Overlord is a super-powered crime lord who operates out of Chicago. Formerly a mafia boss, he had Cyberdata and his second-in-command Cyberface build him a suit, based on Dread Knights, which granted him immense power, in order to make sure he wasn't overthrown by Supervillains.

Sebastian Khan had long been Seghetti’s second-in-command and his mastery of cybernetics led him to construct a suit of armor for his leader. Seghetti donned the impressive battle-suit and took on the guise of OverLord. Soon after, he turned his back on Khan and formed the Vicious Circle, an organized crime cartel composed of mainly super-powered freaks. The Vicious Circle overpowered the traditional mafia crime families and enabled OverLord to hold the whole of Chicago in his grip.[citation needed]