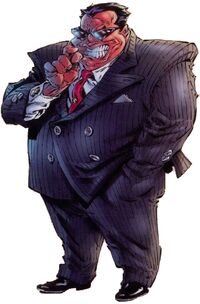 Tony Twist is a New York Mafia boss in New York City. He originally went by the alias Vito Gravano due to his Italian heritage but was sometimes referred to as Don Dracula for his habit of stealing power from others. Tony is arrogant, brutal, and has a futuristic vision that continuously puts him one step ahead of others.

Tony was born and raised in Villalba, Sicily. He was the youngest son of a poor family of farmers. Despite this, he ascended in the clergy due to family connections. However, Antonio was more ambitious and his thirst for money and power led him to join to one of the toughest and violent gangs of Sicily.

He soon proved himself as the worst, the most savage, and the most intelligent. This caught the attention of the head of the Sicilian Mafia, who sent him to America at age 18, where they begin their criminal activities under the name Tony Twist.

As time went from a simple man in the street, to the powerful lord of the criminal empire of New York, earning the loyalty of hundreds of powerful men, one of them was Jason Wynn, who helped in many Occasion to cover their tracks.

When several of his henchman were murdered by an unknown assailant, Twistelli pulled various mob leaders together to discuss how to solve their problems. Tony brought in the cyborg, Overt-Kill, to assassinate Spawn as they believe he was responsible.[1]

After Spawn destroyed Overt-Kill and appeared in Twists' office and threatened him, he raised the stakes and rebuilt Overt-Kill a second time. At the same time, he became interested in Terry Fitzgerald's activities and sent Overt-Kill after Terry. His plan was ruined again by New York City Police Department officer Twitch Williams who found an Achilles' heel in Overt-Kill's armor, and shot a bullet though his brain to reprogram it.[2]

Twist began receiving pressure from Italy for losing Overt-Kill. He began a plan to send a substitute back in his place.

Richard Massullo was a mobster who wished to put his life of crime and violence behind him and raise his family. Tony Twist forced him to undergo horrible experiments that turned him into a hideous mutant-cyborg. A creature big and strong enough to murder in Overt-Kill's stead.

When Richard escaped, Twistelli had his wife and baby murdered. Having nothing to live for but revenge he tried to blackmail Spawn into helping him. Spawn sympathized for him and gave Massullo a dossier filled with juicy info on Twistelli. Spawn then threatened Twist and told him to stay out of his alleys.[3]

Later, Richard Massullo returned to New York City and discovered his brother, David Massullo was held captive by Twist. When he arrived to free him, he discovered David was willingly working for Twist. Spawn, angry, interceded and severely injured David. Tremor became angry but had no time and fled with David to a hospital. Spawn then threatened Twist again to stay out of his, and Terry's lives forever.[4]

Tony's business began getting hit. Tony turned to Jason Wynn for help. Wynn tells him the men are too powerful and he can't help him.[5]

Tony visits his brother, Bernardo Twistelli, who is a preacher. Bernardo turns him away and tells him he's a disgrace to the family name. He tells him the Vatican Secret Police, the world's most dangerous and powerful organization, is coming for someone in his organization that serves God and plans on turning the current Hellspawn to fight for them.[6]