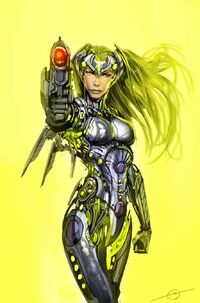 Aphrodite IX is a strikingly beautiful self-aware android designed to "be" human in order to carry out undercover missions of infiltration and assassination. She was built by Cyberdata and seen observing former Cyberdata operatives known as Cyberforce. Recently she has had an encounter with Witchblade bearer Sara Pezzini in which she defeated the mystically enhanced police officer. She was then hired to locate and capture Jackie Estacado, the wielder of the Darkness.

Recently a member of Cyberdata defected and Aphrodite IV was sent to retrieve him. An unknown force was able to prevent this and damaged the unit. She is set to have a rematch with Detective Pezzini.

Retrieved from "https://imagecomics.fandom.com/wiki/Aphrodite_IV_(Top_Cow)?oldid=67138"
Community content is available under CC-BY-SA unless otherwise noted.