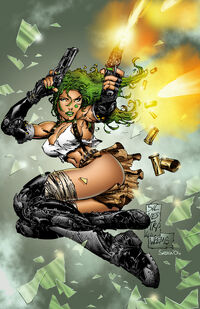 Aphrodite IX is a strikingly beautiful self-aware android designed to "be" human in order to carry out undercover missions of infiltration and assassination. Although she has been "trained" to kill (her synthetic brain learns like an organic brain and does not require traditional programming), Aphrodite IX retains no memory of her actions; her brain is designed to experience an episode of amnesia at the end of each mission, apparently to protect her masters if not herself. This leads to ongoing confusion about what she does and for whom, exacerbated by subsequent episodes of amnesia. Although she becomes aware that she is intended as a killing machine (capable of taking out a single high security target or destroying a squad of armored government soldiers singlehandedly), she finds the idea increasingly distasteful and experiences dreams and desires like a human. This begins to undermine her morale but not her efficiency, as her conditioning takes over as her masters or survival circumstances require. When she seeks out clues to her past and true identity, she stumbles onto a conspiracy involving a secret society of cyborgs attempting to undermine the legitimate An agovernment.

Although tough as nails when the situation requires it, her personality in private moments seems more like that of a child-woman. She is like a lost wide-eyed teen trying to find her way in the world, trapped in the body of an amazon sexpot bombshell. The character's appearance is her trademark: kelly green makeup and hair (including an oversized kelly green beauty spot on one cheek), skimpy form-fitting outfits ringed with ammo belts, thigh-high lug soled boots. She typically carries a very large knife on her belt and one or more large guns.

An android similar to Aphrodite IX (identified as Aphrodite IV) most recently appeared in Top Cow's ongoing series Cyberforce, spying on the heroes from within the ventilation system of their base of operations. At this time, no clue is given as to why she is there or what she intends to do.

Issue number 0 was released with an issue of Wizard magazine on November 30, 1999. Originally appearing on the Top Cow solicitation schedule as a monthly title, to date only 6 issues and one trade paperback have ever been published. The 2000 publication year saw the release of issues 1 and 2. Before issue number 3 was released in early 2001, Finch was replaced with artist Clarence Lansang (the issue features artwork by both artists), implying that Finch's work habits were responsible for the delays, yet only two more issues would be published during Lansang's tenure (number 1/2, a place-holder issue recapping previous story events and containing ten pages of "pin-ups" by various artists, and number 4 which continued the story but did not finish it). Aphrodite IX still appears on the Top Cow website as a "current" publication, although Wohl has since moved on to other projects.

A trade paperback, Aphrodite IX: Time Out of Mind, collecting all extant issues, was released in 2003. The subtitle implies that this is the first collected arc of an ongoing publication.

Currently there is an anime of Aphrodite IX being developed, but aside from a trailer released in early 2005 there has been little apparent activity and no further news on the project.

Retrieved from "https://imagecomics.fandom.com/wiki/Aphrodite_IX_(Top_Cow)?oldid=64936"
Community content is available under CC-BY-SA unless otherwise noted.